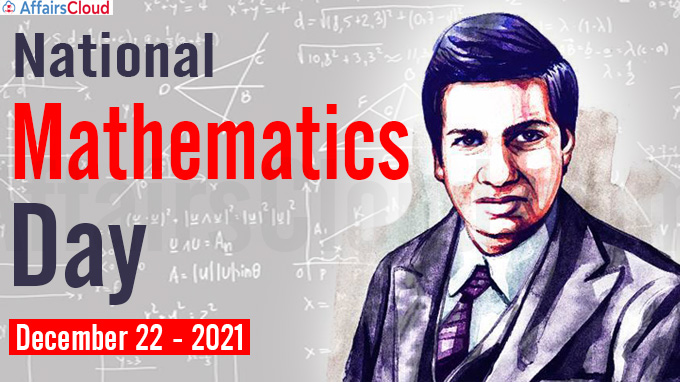 The day is observed to highlight the importance of mathematics in the development of the nation and to honour the works of Srinivasa Ramanujan.

i.In 2012, to mark the 125th birth anniversary of Srinivasa Ramanujan, then Prime Minister Manmohan Singh declared the 22nd December of every year as the National Mathematics Day.

ii.He also declared the year 2012 as the National Mathematics Year.

i.In 1918, at the age of 31, Ramanujan became the youngest Fellow in the history of the Royal Society. He was the 2nd Indian to be elected to the Royal Society after Ardaseer Cursetjee(1841).

ii.He was the first Indian to be elected a Fellow of Trinity College.

i.By the age of 32 he had compiled 3900 results which were mostly on identities and equations.

ii.His discoveries have influenced various areas of mathematics and he is well known for his significant contributions to the analytical theory of numbers, elliptic functions, continued fractions, and infinite series.

The Hardy-Ramanujan Number, 1729, is the smallest number that can be expressed as the sum of two different cubes in two different ways.

It is also known as Ramanujan’s Number.

Biography: American biographer and science writer, Robert Kanigel, authored the biography of Ramanujan titled “The Man Who Knew Infinity: A Life of the Genius Ramanujan”.

The 2021 SASTRA Ramanujan Prize was awarded to Dr Will Sawin of Columbia University, United States of America(USA).

This is the annual prize awarded for outstanding contributions by individuals not exceeding the age of 32 in areas of mathematics.