On September 4, 2019 the Vice President of India Shri Venkaiah Naidu addressed the valedictory session of the national conference on 2019 ‘India-Africa Partnership in a Changing Global Order–Priorities, Prospects and Challenges’ in New Delhi organised by Indian Council of World Affairs (ICWA). 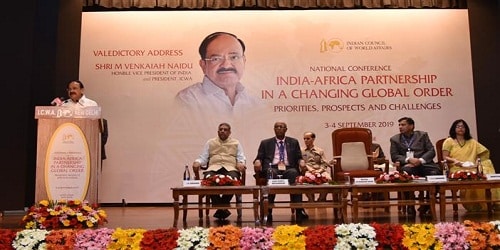 Indian contribution to Africa:
India has provided 189 LOCs (Lines of Credit) to 42 African countries with total worth $11 billion. It is 42% of the total amount of LOCs offered by India through EXIM(Export-Import) Bank.