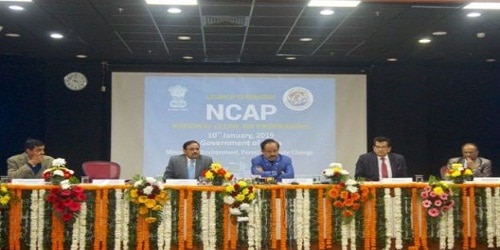 About the NCAP:
i. It will be a mid-term, five-year action plan with 2019 as the first year.
ii. It will be launched in the 43 smart cities falling in the list of the 102 non-attainment cities, under the Smart Cities program.
iii. Institutional Framework at Centre and State Level comprising of Apex Committee at the Ministry of Environment Forest and Climate Change in the Centre and at Chief Secretary Level in the States are to be constituted for implementation of the action plans of cities.
iv. Additionally, sectoral working groups, national level Project Monitoring Unit, Project Implementation Unit, state level project monitoring unit, city level review committee under the Municipal Commissioner and DM level Committee in the Districts are to be constituted under NCAP.
v. The respective ministries/institutions responsible for the institutionalization of NCAP are:

Background:
3% of the land, but contribute to 82% of GDP and responsible for 78% of Carbon dioxide emissions.