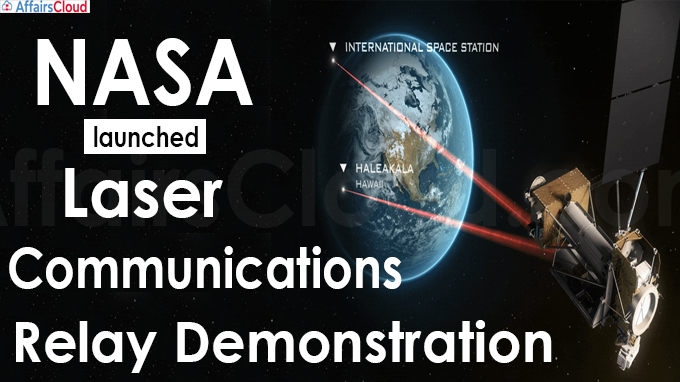 ii.This can enable data rates 10 to 100 times greater than the radio frequency systems, which are currently used by spacecraft.

iv.It is funded and managed through NASA’s Technology Demonstration Missions program, part of the Space Technology Mission Directorate, and the Space Communications and Navigation Program at NASA Headquarters.

i.This will send and receive data at a rate of 1.2 gigabits per second from geosynchronous orbit to Earth.

iii.LCRD will start its operations in a geosynchronous orbit about 22,000 miles above Earth

i.Ultraviolet Spectro-Coronagraph Pathfinder (UVSC Pathfinder) is a joint experiment with the Naval Research Lab that studies the origins of solar energetic particles, the Sun’s most dangerous form of radiation.

ii.It was designed and built in the U.S. Naval Research Laboratory and funded through NASA’s Heliophysics Program and the Office of Naval Research.

iii.UVSC pathfinder will be managed by the Heliophysics Technology and Instrument Development for Science program office, NASA Headquarters.

Indian-origin physician Anil Menon, a lieutenant colonel at the US Air Force, has been selected as one of the 10 candidates of NASA’s 2021 Astronaut Candidate Class.

Anil Menon was born to Ukrainian and Indian immigrants. He hails from Minneapolis, Minnesota.

NASA Administrator Bill Nelson introduced the members of the 2021 Astronaut Candidate Class, 10 members of the Artemis generation, at the Ellington Field near NASA’s Johnson Space Center in Houston. This is the first new class in 4 years.

On 24th November 2021, the National Aeronautics and Space Administration (NASA) launched the world’s first planetary defence mission, the Double Asteroid Redirection Test (DART) to intentionally smash a spacecraft into an asteroid Didymos at 15,000 miles per hour.

About National Aeronautics and Space Administration(NASA):