Journalists who have endured death threats, physical attacks and imprisonment are being honored in New York with Press Freedom Awards.

The Committee to Protect Journalists 2015 International Press Freedom Awards will be presented at a CPJ’s annual award ceremony and benefit dinner in New York City on November 24, 2015. 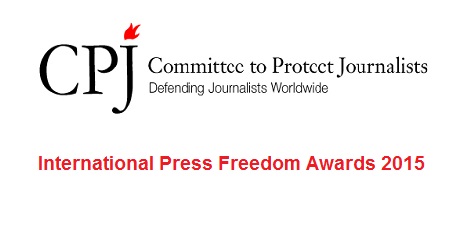 CPJ’s first cartoonist awardee, who is charged with sedition and faces a potential 43-year jail term for drawings lampooning high-level abuse in the Malaysian government.

Journalist who faces death threats and has lived under 24-hour police protection for the past two decades because of his reporting on drug smuggling on the Brazil-Paraguay border.

a Syrian citizen journalist collective and one of the few independent news sources that continues to report from inside the Islamic State’s self-proclaimed capital.

Group of bloggers of which six were arrested, imprisoned, and charged with terrorism in retaliation for critical reporting

The Associated Press’s special regional correspondent for Pakistan and Afghanistan, Kathy Gannon, will receive the Burton Benjamin Memorial Award for lifetime achievement in the cause of press freedom.

–        The CPJ International Press Freedom Awards honor journalists or their publications around the world that show courage in defending press freedom despite facing attacks, threats, or imprisonment.

–        Established in 1991, the awards are administered by the Committee to Protect Journalists (CPJ), an independent, non-governmental organization based in New York City.