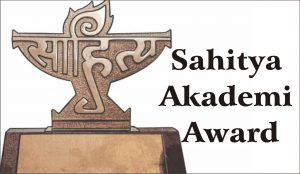 Jerry Pinto (born 1966) is a Mumbai-based Indian writer of poetry, prose and children’s fiction in English language, as well as a journalist.

Vannadasan aka Kalyanji is a Tamil writer from India born in 1946. He writes short stories and non-fiction articles under the pseudonym of Vannadhasan and poems under Kalyanji.

Nasira Sharma a Hindi Writer born and brought up in Allahabad. She has written many verses and stories in the Hindi language.

About The Sahitya Akademi Award

The Sahitya Akademi, India’s National Academy of Letters, is an organisation dedicated to the promotion of literature in the languages of India.