Setting a new record in the space mission, the Indian Space Research Organization (ISRO) successfully launched 104 satellites in one go from the Satish Dhawan Space Centre in Sriharikota, Andhra Pradesh, on February 15, 2017.

The 104 satellite included a 714 kg Cartosat-2 Series satellite for earth observation, two Indian nano satellites INS-1A and INS-1B and 101 international nano satellites. Of the 101 satellites, 96 of these belong to USA and one each belongs to Israel, Kazakhstan, Netherlands, Switzerland and United Arab Emirates. 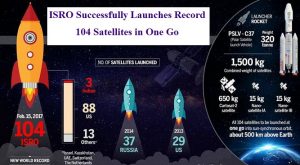 About the Launch Vehicle PSLV

Scientists have used the XL variant of PSLV which is the most powerful rocket of ISRO.

The successful launch set a new record for ISRO for launching the most number of satellites (104) in one go.

ISRO is the space agency of the Government of Republic of India headquartered in the city of Bengaluru. It is managed by the Department of Space