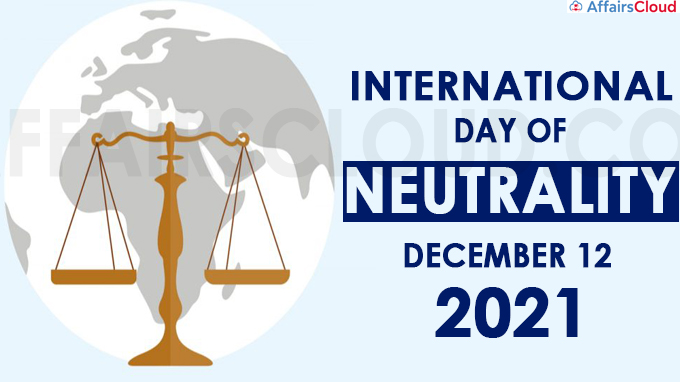 The United Nations (UNs) International Day of Neutrality is annually observed globally on 12th December to promote neutrality among countries and to lay emphasis on raising awareness levels in public about the value of neutrality in international relations.

Note – UNGA adopted the resolution ‘Permanent Neutrality of Turkmenistan’ on 12th December 1995, it is the only country in the world, which got the permanent neutrality from the United Nations.

i.Neutrality is a legal status between an aggressive country and the neutral country, the country not participating in a war.

ii.Neutrality plays an important role in reducing the risk of damage to the countries getting into conflict.

i.The ‘Preventive diplomacy’ refers to diplomatic action taken to prevent disputes from escalating into conflicts and to limit the spread of conflicts when they occur.

ii.The United Nations highlights the importance of neutrality through national policies by the use of preventive diplomacy.