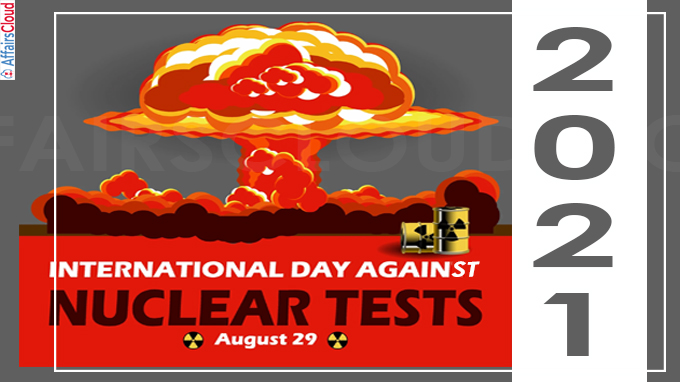 The United Nations(UN)’s International Day against Nuclear Tests is annually observed across the globe on 29th August to create awareness about the hazards of testing nuclear weapons or other nuclear explosions and the need to end nuclear tests and achieve a nuclear-weapon-free world.

29th August 2021 marks the observance of the 12th International Day against Nuclear Tests.

i.The United Nations General Assembly (UNGA) adopted the resolution A/RES/64/35 on 2 December 2009 and proclaimed the 29th August of every year as the International Day against Nuclear Tests.

ii.The resolution was initiated by the Republic of Kazakhstan along with several sponsors and cosponsors.

The 29th August was chosen to commemorate the closure of the Semipalatinsk Nuclear Test site on 29 August 1991.

i.The Army of the United States of America (USA) conducted the first detonation of a nuclear device on 16 July 1945.

ii.‘Trinity’ was the code name of the first-ever nuclear bomb which was denoted in New Mexico, USA as a part of the Manhattan Project.

Since 1945, more than 2000 nuclear weapons testing has taken place.

International Day for the Total Elimination of Nuclear Weapons:

i.Comprehensive Nuclear-Test-Ban Treaty (CTBT) adopted by the UNGA on 10th September 1996, is an international instrument to end all forms of nuclear testing.

ii.185 countries have signed the CTBT and 170 have ratified it.

iii.For the treaty to enter into force, it must be ratified by the countries with nuclear capabilities.