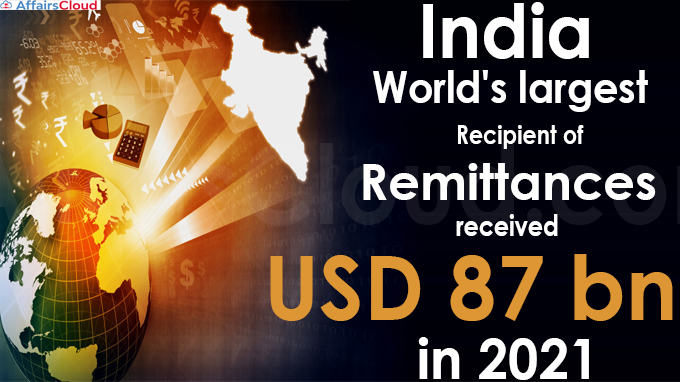 In accordance with the latest report by the World Bank (WB) titled ‘World Bank’s Remittance Prices Worldwide Database’, India became the world’s largest recipient of remittances by receiving USD 87bn in 2021. The United States (US) was its biggest source, accounting for over 20% of these funds.

i.Remittances to low and middle income countries are projected to have grown a strong 7.3% to reach USD 589 billion in 2021.

ii.In line with global macroeconomic forecasts, remittances are projected to continue to grow by 2.6% in 2022.

iii.Remittances registered strong growth in most regions. Flows increased by 21.6% in Latin America and the Caribbean, 9.7% in Middle East and North Africa, 8% in South Asia, 6.2% in Sub-Saharan Africa, and 5.3% in Europe and Central Asia.

iv.In East Asia and the Pacific, remittances fell by 4% though excluding China.

The World Bank was created at the 1944 Bretton Woods Conference, along with the International Monetary Fund (IMF).