According to a data released by a non-governmental environmental organization, Greenpeace, India is the world’s top emitter of anthropogenic sulphur dioxide(SO2)  in the world with more than 15% of all the SO2 hotspots, tracked by NASA’s (National Aeronautics and Space Administration) OMI (Ozone Monitoring Instrument) satellite. The name of the report is “Global SO2 emission hotspot database: Ranking the world’s worst sources of SO2 pollution”. It is written by Sunil Dahiya and Lauri Myllyvirta. 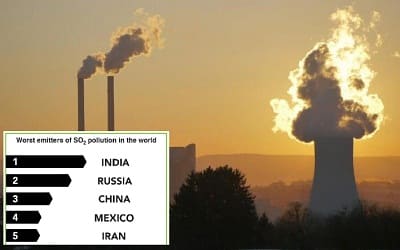 Key points:
i. SO2 hotspots in India: The reports finds that Singrauli in Madhya Pradesh, Neyveli, and Chennai in Tamil Nadu, Talcher and Jharsuguda in Odisha, Korba in Chhattisgarh, Kutch in Gujarat, Ramagundam in Telangana and Chandrapur and Koradi in Maharashtra are the major SO2 hotspots in India.
ii. SO2 Hotspots in the World:  Norilsk smelter complex in Russia is the largest SO2 emission hotspot in the world, followed by China, Mexico, Zagroz (Iran) and  Kriel in Mpumalanga province (South Africa).
iii. About SO2: It is produced from burning of coal in power plants and other industries and it is known to largely contribute to air pollution.
iv. Impact: The air pollution created by SO2 is the huge public health concern with 91 % of the world’s population living in areas where air pollution exceeds the limit set by the World Health Organization (WHO). Around 4.2 million people are dying prematurely every year due to air pollution.
v. Control measures: As per the environment experts, India should take stricter action against coal power plants.
iv. Action taken:  For the 1st time in December 2015, The Ministry of Environment had released SO2 emission limits for coal power plants & set the initial deadline to control SO2 emissions from power generation by December 2017 and it was later extended till December 2019.
About Greenpeace:
♦ Formation: 1969
♦ Headquarters :Amsterdam, Netherlands