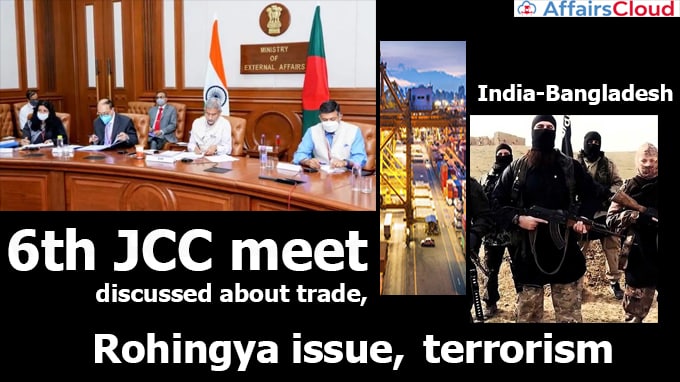 On September 29, 2020 India and Bangladesh held the 6th Joint Consultative Commission (JCC) meet through a virtual platform. The meeting was co-chaired by A. K. Abdul Momen, Foreign Minister of Bangladesh and S Jaishankar, External Affairs Minister of India.

i.The Two sides reviewed the progress made in Bilateral relations in the implementation of various decisions taken during the Fifth JCC Meeting held in New Delhi in February 2019 & visit of Bangladeshi Prime Minister Sheikh Hasina to New Delhi in October 2019.

i.During the meeting, the Ministers jointly released commemorative postal stamp issued by the Government of Bangladesh on the occasion of the 151st Birth Anniversary of Mahatma Gandhi.

ii.India is planning to launch a postal stamp on the occasion of the Birth Centenary of Bangabandhu Sheikh Mujibur Rahman (“Father of Nation” of Bangladesh) on December 16, 2020.

ii.The Celebrations will take place in India, Bangladesh and other select third countries through respective Missions.

iv.The event will also include honoring Indian War Veterans of 1971, revival of historic Mujibnagar-Kolkata road through inauguration of Swadhinota Shoroni and establishment of permanent immigration check post at Mujibnagar.

A Website will be launched on 50 years of victory and friendship between two countries, and documents relevant to the 1971 victory will be available for the public on the website.

A Bangabandhu-Bapu digital museum in India and Bangladesh will take place in India, Bangladesh and other places.

i.The Two sides discussed the progress made on the biopic of Sheikh Mujibur Rahman, under the direction of Indian Film Maker Shyam Benegal.

ii.India requested approval for erecting a Single Row Fencing in vulnerables patch along the border, to contain border crimes.

i.India and Bangladesh decided to form a ‘High Level Monitoring Committee’ to review progress of implementation of 3 Line of Credit Projects concluded between them.

ii.It will be headed by Secretary, Economic Relations Division, Bangladesh and High Commissioner of India in Dhaka.

Framework of Interim Agreement on sharing of Waters:

ii.The two reiterated their commitment towards the finalization of the Interim Agreement for Sharing the waters of River Teesta.

Bangladesh’s Exports to India crossed US $ 1 Billion Dollar Mark in 2018-19 due to duty free access of Bangladeshi Products into Indian Market under South Asian Free Trade Area (SAFTA), although the Balance of trade remained in favour of India.

The Two countries noted the sustained engagement which took place between the two countries during the pandemic.

India, Bangladesh agreed to start ‘air travel bubble’ flights to meet the requirements of some categories of Travellers on both sides during the pandemic.

i.Both sides also agreed to hold the next Annual Defence Dialogue in November, 2020.