On August 24,2019, former Finance Minister Shri Arun Jaitley passed away at the age of 66 due to health related ailments at the All India Institute of Medical Sciences (AIIMS) Delhi where he underwent treatment several weeks after suffering from breathlessness and restlessness. 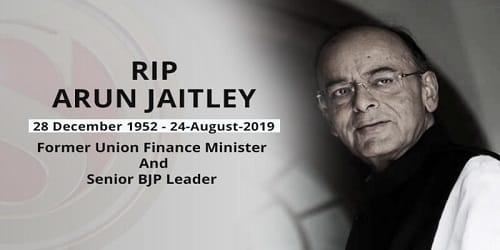 Key points
i. Lawyer by profession, Arun Jaitley, who was born on 28 December 1952, was a member of the political Bharatiya Janata Party (BJP) and held various portfolios during the Government of Atal Bihari Vajpayee and Shri Narendra Modi government’s first term. They were

ii. He directly contested and lost his first parliamentary election in 2014 from Amritsar constituency of Punjab.
iii. Being a finance minister under Modi’s first government, ArunJaitley stepped down from contesting in the 2019 loksabha election citing health issues.
iv. He also served as a member of the Board of Governors of Asian Development Bank(ADB).

Initiative & Reforms:
He introduced many key reforms and initiatives like establishment of the monetary policy committee and demonetising high value notes in November 2016, liberalisation of foreign direct investment framework and abolition of Foreign Investment Promotion Board(FIPB) which is now replaced as Foreign Direct Investment (FDI), and implementation of the Goods and Service Tax(GST).

Treatments underwent:
i. Jaitly who served as Finance Minister(FM) from 2014-2019 underwent a renal transplant in 2018 May, and his post as FM was replaced by the then railway minister Piyush Goyal in his absence.
ii. He returned back to office on August 2018.
iii. Previously he had also undergone bariatric surgery in 2014.