On April 20, 2020 The National Biofuel Coordination Committee (NBCC) meeting under the chairmanship of  Dharmendra Pradhan, Minister of Petroleum & Natural Gas has approved & allowed  Food Corporation of India (FCI) to convert the available surplus rice to ethanol so as to utilize it in making alcohol-based hand-sanitizers & also  for the  Ethanol Blended Petrol (EBP) programme. 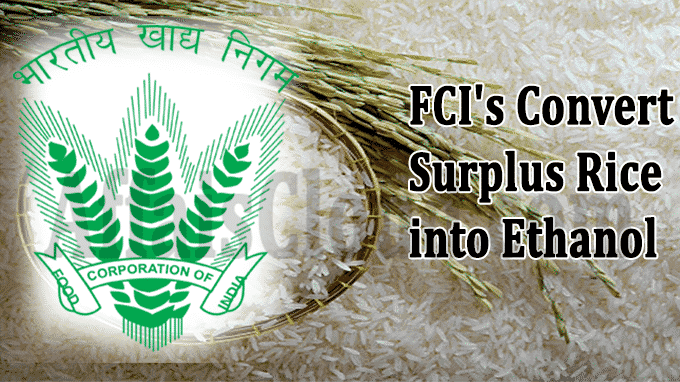 Policy
It is approved in reference to the National Policy on Biofuels (2018) under Para 5.3 envisages that during an agriculture crop year when there is oversupply of food grains as  anticipated by the Ministry of Agriculture & Farmers Welfare, the policy will allow conversion of these surplus quantities of food grains to ethanol, based on the approval of NBCC.

ii.Currently it has huge rice stock from previous years & does not include the 19.23 mt of unmilled paddy lying with millers on behalf of FCI.

iii.The food grains stock is higher than the required norm of maintaining a reserve of about 21 million tonnes as on April 1.

iv.Under the National Food Security Act (NFSA),2013 .the government is supplying 5 kg of food grains & 1 kg of wheat per month(for 3 months) to over 80 crore people at a highly subsidised price of Rs 2-3 per kg on March 26 as a relief to poor people during the ongoing lockdown period.

v.The 5 kg grains are over and above the regular Public Distribution System(PDS) allotment &  estimates, to absorb close to 11 mt more rice from the Centre’s pool.

vi.By using the surplus rice for ethanol, it will address about 750 million litres from the total capacity of 2 billion litres of grain-based distillery capacities lying idle, due to lack of feed stock, to some extent &  will absorb some of the surplus rice lying with the FCI, which is estimated to be several times the required quantity.