The account which has not been used for 24 months (2 years) by its operator is termed as dormant account while the account in which all the activities have been stopped by the bank is a frozen account. 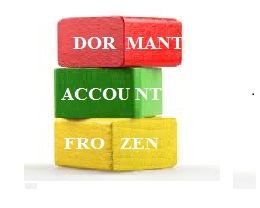 We will see separately that how and why an account becomes dormant and frozen.

Inactive account:  An account (current or a savings bank account)that hasn’t been used and have not done any transactions through it for more than 12 months (1 year), then it will be classified as an inactive account.

Why the accounts become inoperative?

Some of the reasons are:

What is the need to label an account as inoperative or dormant?

What activities can be performed to keep an account active?

The accounts named as dormant cannot be frozen.