23rd annual “conference of the parties”(COP) under the UN Framework Convention on Climate Change (UNFCCC) begun on November 6, 2017 in Bonn, Germany. This conference will continue till November 17, 2017.

Global climate talks begin in Germany with Fiji at the helm 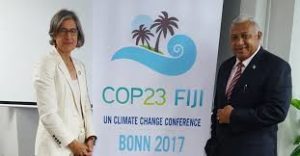