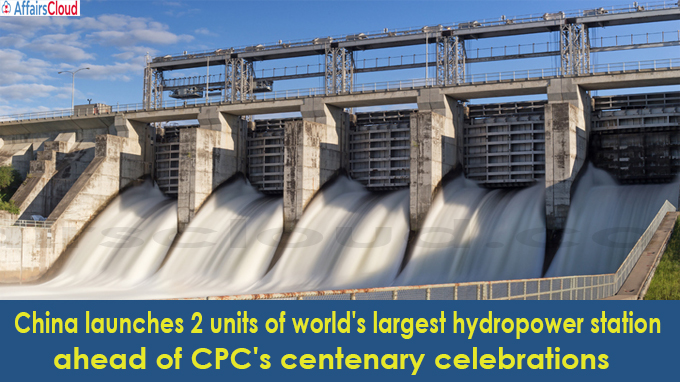 On June 28, 2021, China launched two units of its world’s largest Baihetan hydropower station worth USD 34 billion. The units, currently under construction, are located on the Jinsha River, the upper section of the Yangtze River, and straddle the southwestern provinces of Yunnan and Sichuan.

ii.It is an ultra-high double-curvature arch dam with a maximum height of 289 meters and an arc length of 709 meters.

iii.All units will be operational in July 2022 with a generation capacity of over 62.4 billion kilowatt-hour of electricity every year on average.

iv.After full operationalization, it is expected to save approximately 19.68 million tonnes of standard coal, and reduce carbon dioxide emissions by 51.6 million tonnes, sulfur dioxide by 170,000 tonnes and nitrogen oxides by 150,000 tonnes annually.

i.China has already built Three Gorges Dam worth 220 billion yuan ($34 billion)on the Yangtze River and has approved plans to build another dam on the Brahmaputra River in Tibet close to Arunachal Pradesh.

i.China opened its 5G Signal base at the World’s Highest Radar Station, “Ganbala radar station” which is located at a height of 5,374 meters, in the remote Himalayas of China’s Tibet autonomous region.