On September 12, 2018, The Cabinet Committee on Economic Affairs, chaired by the Prime Minister Shri Narendra Modi approved the following: 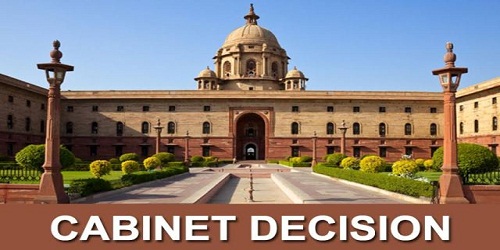 About the Capacity Development Scheme:
i. It has 2 sub schemes:
Economic Census and Support for Statistical Strengthening (SSS).
ii. The ongoing activities are:

Cabinet approved price revision of ethanol price derived from B heavy molasses / partial sugarcane juice and 100% sugarcane juice for Ethanol Supply Year 2018-19
On September 12, 2018, the Cabinet Committee on Economic Affairs, chaired by the Prime Minister Shri Narendra Modi has given its approval to revise / fix the price of ethanol.
i. This ethanol is derived from B heavy molasses / partial sugarcane juice.
ii. Also fixing a higher price for 100% sugarcane juice based ethanol has been approved.
iii. This is for the forthcoming sugar season 2018-19 during ethanol supply year from 1st December 2018 to 30th November 2019.
iv. This is under Ethanol Blended Petrol Programme.
iv. The changes are as follows:

ii. This would enable them to be in the list of ‘Institutions of National Importance (INIs)’.
iii. Other amendments in the Act include:

Other NID in the INI list include: National Institute of Design, Ahmedabad.
Background:
NIDs as Institutions of National Importance will create job opportunities, both direct and indirect, by providing sustainable design interventions for crafts, handloom, rural technology, small, medium and large scale enterprises; and outreach programmes for capacity, capability and institution building.

Cabinet approved MoU on Collaborative Research on Distributed Ledger and Block Chain Technology in the context of Development of digital economy by Exim Bank under BRICS Interbank Cooperation Mechanism
On September 12, 2018, the Union Cabinet chaired by Prime Minister Shri Narendra Modi approved MOU between Export-Import Bank of India (Exim Bank) with the participating member banks, under the BRICS Interbank Cooperation Mechanism.
Objective:
For development of digital economy.
Key Points:
i. The members of BRICS in the Mou include:

Cabinet approved Transfer of land for various institutions
On September 12, 2018, the Union Cabinet chaired by Prime Minister Shri Narendra Modi has given ex-post facto approval for the following: