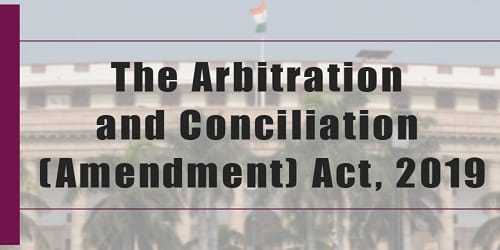 Key points:
i. The Arbitration and Conciliation (Amendment) Bill 2019 was introduced in Rajya Sabha by the Minister for Law and Justice, Mr. Ravi Shankar Prasad, on July 15, 2019(passed by the Rajya Sabha on July 18, 2019)&was passed by the Lok Sabha on August 1, 2019. The previous version of the bill which was cleared by Lok Sabha on August 2018, but was not passed by Rajya Sabha and had lapsed after the dissolution of 16th Lok Sabha.
ii. Features of the new bill: It provides a mechanism to deal time-bound settlement of disputes and ensures accountability of the arbitrator
iii. ACI: It provides for establishing an independent body called Arbitration Council of India (ACI) for the promotion of arbitration, mediation, conciliation, and other alternative dispute redressal mechanisms. This will make the arbitration process more friendly and cost-effective, and ensure timely disposal of cases.
iv. Functions of ACI:

v. Appointment: It allows appointment of arbitrators by “arbitral institutions” designated by the Supreme Court(SC) /High Court(HC) rather than Supreme Court or a high court themselves. The ACI will consist of a Chairperson who is either a Judge of the Supreme Court/ a Judge of a High Court/Chief Justice of a High Court/ an eminent person with great knowledge in conduct of the arbitration.
vi. Completion: it requires that written claim and defense to claim in arbitration proceeding, should be completed within 6 months of the appointment of the arbitrators. So, it will resolve disputes in a timely manner.
vii. Confidentiality of information: Every detail of arbitration proceedings should maintain confidentiality except for details of the arbitral award in certain circumstances. It is further clarified that disclosure of award will be made only where it is necessary for implementing or enforcing the award. Arbitral tribunals are required to make their award within 12 months period for all arbitration proceedings.
About Ministry for Law and Justice:
Formed: 1833
Headquarters: New Delhi