We are here for you to provide the important Recent and Latest Current Affairs 16 April 2021, which have unique updates of Latest Current Affairs 2021 events from all newspapers such as The Hindu, The Economic Times, PIB, Times of India, PTI, Indian Express, Business Standard and all Government official websites. Atal Innovation Mission (AIM), NITI Aayog has signed a Statement of Intent (SoI) with Dassault Systemes Foundation to work towards creating a digitally rich ecosystem of Innovation in India & to promote STEM (Science, Technology, Engineering, and Mathematics) based innovation and entrepreneurship among the youth of India. On April 14, 2021, the Ministry of Agriculture & Farmers Welfare (MoA&FW) signed a Memorandum of Understanding (MoU) with Microsoft India to undertake a Pilot Project in 100 villages (of 10 districts) in 6 states. The pilot programme is aimed at reducing input cost and boosting the income of Farmers. 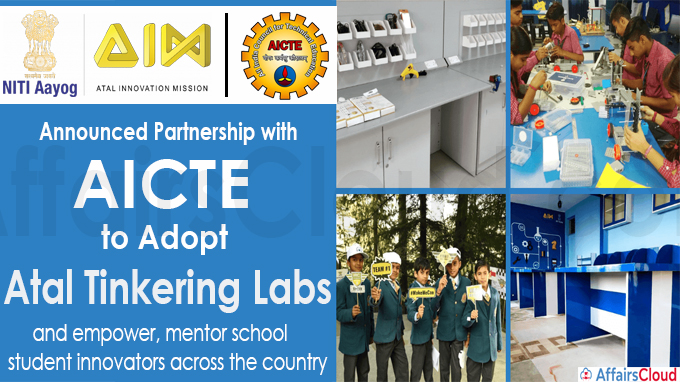 Government has operationalised 75,532 Ayushman Bharat-Health and Wellness Centres across India 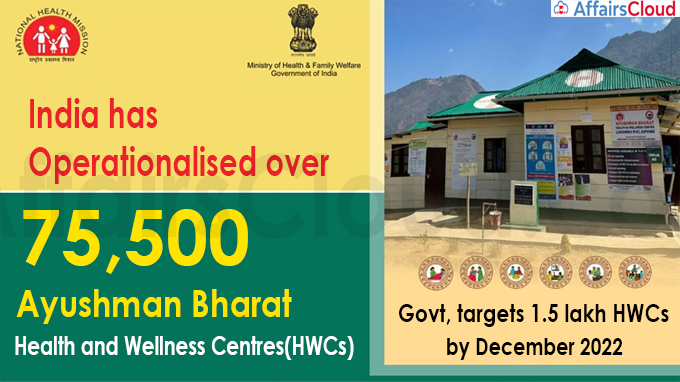 Punjab tops in Operationalization of HWCs
According to the Ranking of states for 2020-21 released by the Government, Punjab achieved the 1st rank in operationalising HWCs in India. On April 14, 2021, Oberoi Group has signed a Memorandum of Understanding (MoU) with Energy Efficiency Services Limited (EESL) to reduce its overall carbon footprint by implementing clean energy efficiency initiatives across its properties.

The National Green Tribunal(NGT) has formed an eight-member National Task Force (NTF) to monitor the remedial steps to improve the status of air quality. NTF will be headed by and coordinated by the Secretary Ministry of Environment and Forests (Currently- Mr.Rameshwar Prasad Gupta).

Key point:
India has the World’s highest death rate from chronic respiratory diseases and 1.5 million people in India are dying annually due to air pollution

About the NTF:
Head: NTF has nominees of Ministries (not below the rank of Joint Secretaries) from Housing and Urban Development, Road Transport, Petroleum, Power, Agriculture, Health and Chairman of Central Pollution Control Board. 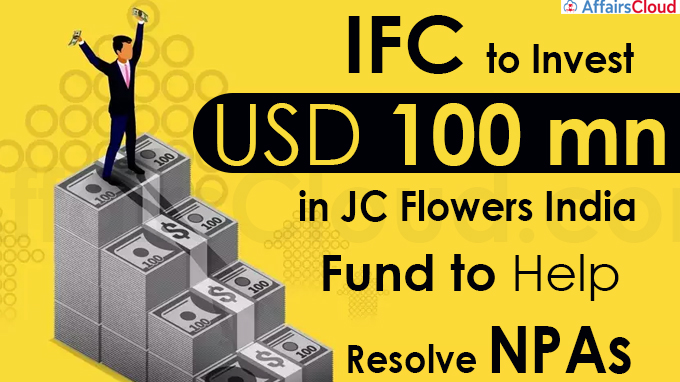 Ujjivan Small Finance Bank (USFB), a wholly-owned subsidiary of Ujjivan Financial Services Limited made a partnership with a fintech, NIRA to strengthen its digital footprint and onboard its customers for Personal Loans. This was USFB’s first Digital Lending Partnership.
Key points about the partnership:

Axis Bank has allowed its customers to make International Fund Transfers (send money abroad) in over 100 currencies across 150 countries through the ‘Send Money Abroad’ feature in the Axis Mobile application with simple two-step process. 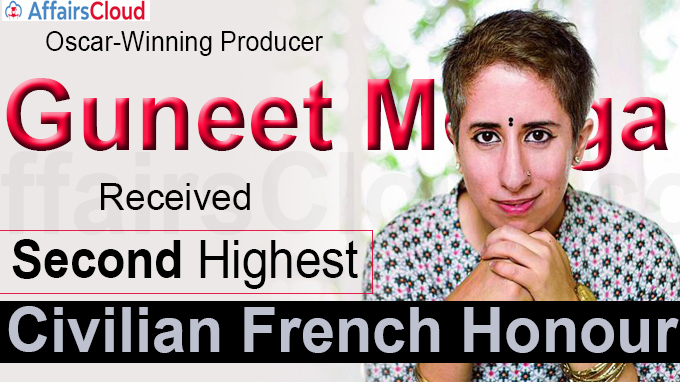 About Guneet Monga and her work:
She is an Indian producer who has won the Oscar in the Documentary Short Subject category at the 91st Academy Awards in 2019 for her short film ‘Period. End of Sentence, 2018’.

About The Order of Arts and Letters of France:
It is a reward that will be given by France to the contributors across the globe under three categories such as Commander, Officer and Knight (Commandeur, Officier and Chevalier). On 14th April 2021, the President of Haiti,Jovenel Moise appointed Claude Joseph current minister of foreign affairs and worship as the new Prime Minister(PM) of Haiti.
Key Points:
i) He succeeds Joseph Jouthe who resigned from power because of the ongoing political crisis and unrest among the people.
ii) Joseph Jouthe was appointed as PM on March 2020 during the outbreak of the covid-19 pandemic
iii) Meanwhile, the country has been severely affected by economic crisis caused by the corona virus outbreak .
About Haiti:
Capital:Port-au-prince
Currency:Haitian gourde
President:Jovenel moise
Prime minister:Claude Joseph 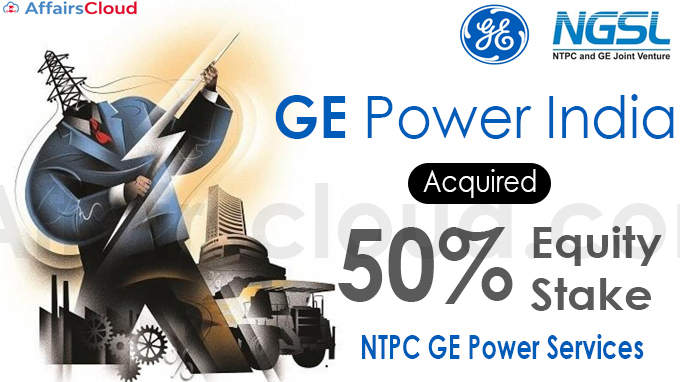 Note – The related-party transaction refers to a deal or arrangement made between two parties who are joined by a preexisting business relationship or common interest. 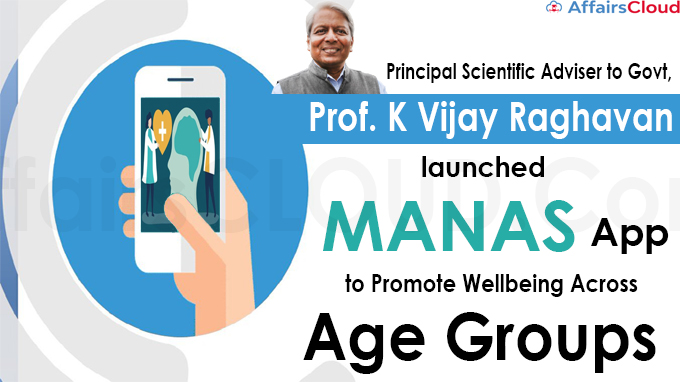 About Principal Scientific Adviser (PSA):
It is the chief advisor to the Government on matters related to scientific policy.
PSA – Professor K. VijayRaghavan
>>Read Full News

About National Commission for Scheduled Castes (NCSC):
It comes under the jurisdiction of the Ministry of Social Justice and Empowerment
Chairman – Vijay Sampla
Headquarters – New Delhi
>>Read Full News As per the recent information provided by the Indian Ministry of Science and Technology, the Government of India and Sri Lanka have decided to provide bilateral support with the two countries’ scientists for the joint research on nine projects and 3 workshops in various fields.
i.Department of Science and Technology (DST), Government of India and the State Ministry of Skills Development, Vocational Education, Research & Innovation, Government of the Democratic Socialist Republic of Sri Lanka has launched a joint research proposal in various fields including Food Technology; Plant base medicines;Metrology and more in 2019.
ii.The call for proposals was a result of 2008 inter-governmental cooperation in science and technology between India and Sri Lanka The cooperation was initiated and discussed through the India Sri Lanka Sub-Commission on Science & Technology, under the umbrella of the inter-governmental India-Sri Lanka Joint Commission.
About Department of Science and Technology (DST),India
Secretary – Prof. Ashutosh Sharma
Established in – May 1971
Headquarters – New Delhi
>>Read Full News

The United Arab Emirates (UAE) Space Centre is planning to send its rover ‘Rashid’ to the moon on an unmanned spacecraft by 2022.  The rover will be deployed on the Moon using Japan based ispace company’s Lunar lander. The rover is named after Dubai’s ruling family(Current Ruler-Sheikh Mohammed bin Rashid) Former Indian Hockey legend Balbir Singh Junior passed away at the age of 88 due to heart failure in Chandigarh. He was a member of the Indian Hockey team which won silver medal at the 1958 Asian games.
About Balbir Singh Jr:
i)Balbir Singh Jr was born in Jalandhar, Punjab on May 2,1932.
ii)He is popularly considered as the nursery of Hockey players in India.
iii)He served in Indian army from 1962 and retired as Major in 1984.
iv)He debuted for India’s National Hockey Team in 1951 & also played for Services Hockey team, Indian Railways. On 14th April 2021, Prime Minister Narendra Modi virtually participated in the Association of Indian Universities’ 95th Annual Meet and National Seminar of Vice-Chancellors. On the occasion he released 4 books based on Baba Saheb Bhimrao Ambedkar’s life, which were authored by Kishor Makwana.
4-Books: Dr. Ambedkar Jivan Darshan, Dr. Ambedkar Vyakti Darshan, Dr Ambedkar Rashtra Darshan, and Dr. Ambedkar Aayam Darshan.
Note- 14th April 2021 marks the 130th birth anniversary of B.R. Ambedkar, which is celebrated in India as Ambedkar Jayanti.
About B R Ambedkar:
i.He is the 1st Law Minister of India & popularly known as the “Father of Indian Constitution”.
ii.He was the inspiration behind the 1956 Dalit Buddhist movement in India.
iii.Books by B.R. Ambedkar – Annihilation of Caste,Who Were the Shudras?,The Buddha and His Dhamma,The Problem of the Rupee: Its Origin and Its Solution,Castes in India.

Suresh Raina penned his Memoir “Believe — What Life and Cricket Taught Me” Co-authored by Bharat Sundaresan to be released by May, 2021.The book will be published by Penguin Random House.
Note – Memoir means a historical account or biography written from personal knowledge.
About the Book:
The Book is all about the Suresh Raina, it describes about his life, challenges he faced as a young cricketer.
About Suresh Raina:
i.He hails from Uttar Pradesh.
ii.He is the first Indian batsman to hit a century in all three formats(Test, ODI, T20I) of international cricket.
iii.He is also the 1st Indian player to score 6,000 and 8,000 runs in T20 cricket.
iv.He is the first cricketer in the history of the Indian Premier League (IPL) to complete 5000 runs.
About Bharat Sundaresan:
He is a world-renowned, award-winning cricket writer currently based in Adelaide, Australia. He is the Australian correspondent and senior writer for Cricbuzz.He was well known for his book, “The Dhoni Touch”.

Paro Anand authored the book on Gandhi, titled “Being Gandhi”.The book was published by HarperCollins Children’s Books. Illustrations was given by Priya Kuriyan. Paro’s story captures the growing relevance of Gandhi’s philosophy and the need to rethink it over the course of a decade and with the plagues of social and political division.