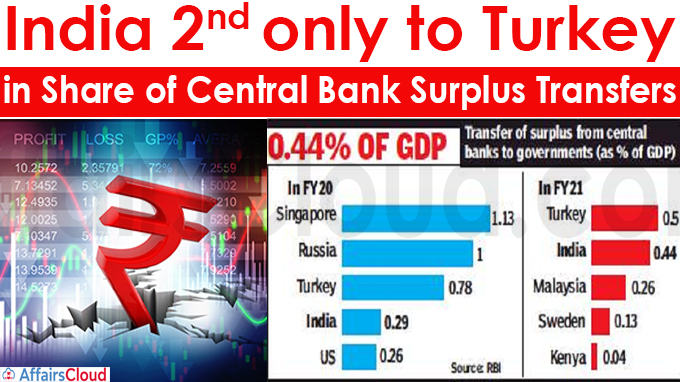 As per the ‘State of Economy’ report by the Reserve Bank of India (RBI) in June 2021, India ranked 2nd after Turkey in terms of the shares of ‘Surplus Transferred from Central Banks to Governments’(as per percent of GDP). RBI has transferred 0.44 percent of GDP to the Government in FY21, in FY20 it was at the 4th position with 0.29 percent.

i.Due to the surplus transfer, RBI was characterised as ‘free-ranging’ and conducting independent monetary policy, i.e., independent of fiscal dominance.

ii.RBI reported India as the 5th largest reserve holding country in the world, the 12th largest foreign holder of US treasury securities and the 10th largest in terms of gold reserves.

iii.As per RBI report, in terms of projected imports for FY22, the current level of reserves would provide cover for less than 15 months, which is lower than other major reserve holders viz, Switzerland (39 months); Japan (22 months), Russia (20 months), and China (16 months).

iv.It also mentioned the co-existence of India’s reserves with net international investment in a position of (-) 12.9 percent of GDP.

vii.In its latest Economic Outlook, on May 31, 2021, the Organisation for Economic Co-operation and Development (OECD) has revised up the global growth forecast for 2021 to 5.8 percent.

On April 23, 2021, due to the prevalence of the COVID-19, The Reserve Bank of India (RBI) has informed the continuation of the existing interim Ways and Means Advances (WMA) limit of Rs 51,560 crore for all states and Union Territories(UTs) for 6 months i.e. up to September 30, 2021.