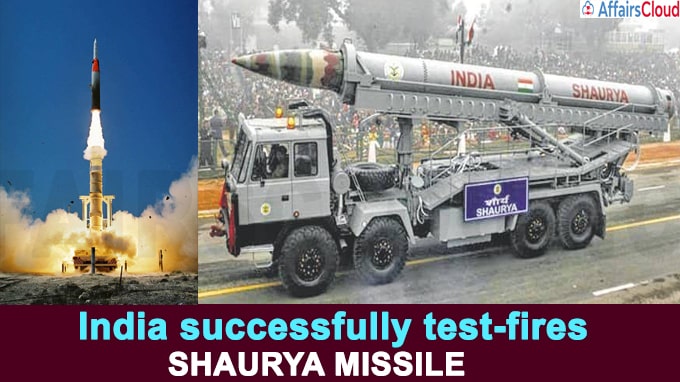 –Designed and developed by DRDO, it can carry both nuclear and conventional warheads.

–Notably, Shaurya is difficult to track by radars as the window for detection, tracking and interception is only 400 seconds. Also it cannot be detected by satellite imaging

-Hypersonic missiles travel at speeds faster than at speeds above Mach 5.

-Supersonic cruise missiles travel at a speed of around 2-3 Mach.

The countries of the United States (US), Russia and China have expertised in developing manoeuvring hypersonic missiles that are extremely hard to track. To join the race with these nations, India is also taking steps in developing ultra-modern weapons that can travel six times faster than the speed of sound in air, and to achieve the aim of Atmanirbhar Bharat (self reliance).

ii.On August 4, 2020, the United States (US) Air Force conducted a scheduled test launch of an LGM-30G Minuteman III, an intercontinental ballistic missile (ICBM) carrying a load of three unarmed reentry vehicles, from Vandenberg Air Force Base in California, US to a target in the Pacific Ocean.