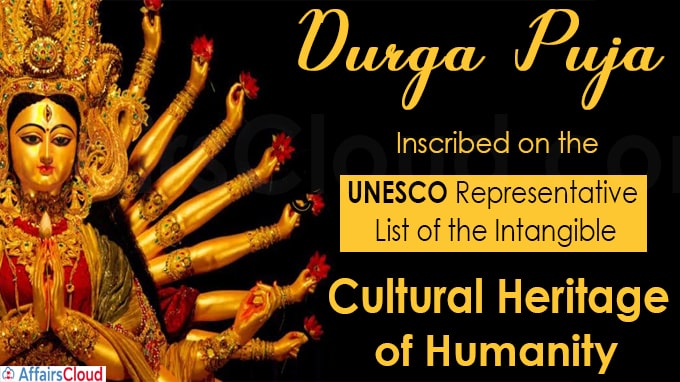 The Intergovernmental Committee (IGC) of UNESCO’s (United Nations Educational, Scientific and Cultural Organization) 2003 Convention on Safeguarding of the Intangible Cultural Heritage (ICH) has inscribed ‘Durga Puja in Kolkata’ on the Representative List of ICH of Humanity during its 16th session of IGC which was held in Paris, France from 13 to 18 December 2021.

i.Durga Puja is an annual festival celebrated in September or October, most notably in Kolkata, in West Bengal of India, but also in other parts of India and amongst the Bengali diaspora.

ii.Clay models of the Goddess are designed and worshipped in ‘pandals’ or pavilions where communities get together and celebrate. People will collectively worship and invoke Hindu Goddess Durga, who is regarded as the feminine energy of the cosmos, also known as ‘Shakti’.

iv.The festival was originated in West Bengal (which has the largest Bengali community in India).

ii.Chaired by Punchi Nilame Meegaswatte, Secretary-General of the National Commission of Sri Lanka for UNESCO, the Intergovernmental Committee also added 4 projects to the Register of Good Safeguarding Practices. Click here to know more

iii.UNESCO has allotted $172,000 from the Intangible Cultural Heritage Fund to a safeguarding project presented by Mongolia, $116,400 to a project in Djibouti and a further $266,000 to a project in Timor-Leste.

i.It was established by UNESCO to ensure better protection of important intangible cultural heritages worldwide and the awareness of their significance. This list is published by the Intergovernmental Committee for the Safeguarding of Intangible Cultural Heritage.

The 41st session of The United Nations Educational, Scientific and Cultural Organization (UNESCO) General Conference was held in Paris, France from 9th to 24th November 2021.