World Bank released a report “Shock Waves: Managing the Impacts of Climate Change on Poverty”. The report examines the relation between climate change and poverty and concludes that climate change is one of the primary contributing factors for growing poverty scenario across the world. 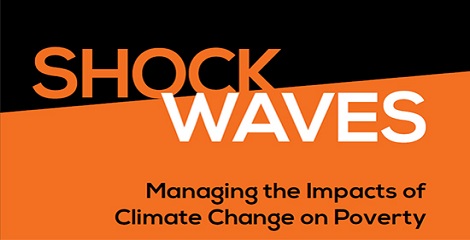 Coping poverty & CC go aside – The agenda of ending poverty and addressing climate change (CC) should go beside each other as climate change impacts could push more than 100 million people into poverty over the next 15 years.

Effects of major channels – There are 3 major channels through which climate-sensitive events already affect the ability of poor people to escape poverty-agricultural production, ecosystems and food security, natural disasters and health.

Bank Group funding – The Bank Group is using the INDCs as a basis of discussion with countries about their national climate action needs and is already at work on initiatives that will help to achieve those commitments.

Increase of portfolio share – World Bank Group has committed to increasing the share of its portfolio devoted to climate finance, from the current 21 percent, to 28 percent, over the next five years.

Inducting of funds – In 2015, the International Finance Corporation (IFC) made $2.3 billion in climate-related investments, covering 103 projects in 31 countries and mobilizing an additional $2.2 billion from private investors.

Carbon fund – The Bank Group is also exploring ways to create incentives for large scale cuts in emissions by widening and deepening carbon markets. The Bank Group has raised $4.36 billion through 18 carbon funds and initiatives, supporting 145 active projects in over 75 client countries.

More than 180 countries have submitted national pledges for climate action before and during COP21, including more than 130 countries working with the World Bank Group.