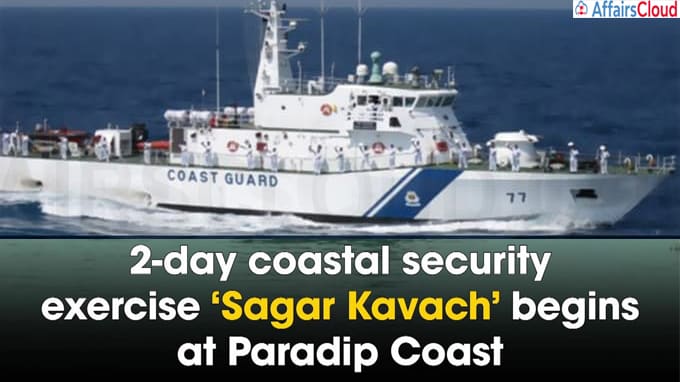 A two-day joint coastal security annual exercise “Sagar Kavach” was held on November 5-6 at Paradip Coast, Odisha. It was carried out by the state governments of Odisha and West Bengal. More than 10 such departments, including the Indian Navy, the Indian Coast Guard, the Odisha Police, the local fishermen, the forest department, and the port marine department, have joined the joint exercise.

In the wake of the 26/11 Mumbai Attack (Maharashtra) on November 26, 2008 by the terrorists, this exercise is being held every year in Indian coastline to prevent a repeat of attacks by sea.

i.A two days long half yearly Coastal Security Exercise “Sagar Kavach” was held on October 8-9, 2020, along the coastal areas of Kerala, Karnataka and Lakshadweep to check Coastal Security mechanism and validate Standard Operating Procedures (SOPs). It assesses the preparedness of security agencies to deal with an asymmetric threat from sea.

ii.On October 9, 2020, a joint anti-terrorist exercise “Suraksha Kawach (security shield)” between Indian Army and Maharashtra Police at Lullanagar Pune (Maharashtra) was organized by Agnibaaz Division (41 Artillery Division) of Southern Command of the Indian Army, along with equipment display. It was carried out taking all safety norms of COVID-19.