We are here for you to provide the important current affairs August 10 2018 which have unique updates of all daily events from all newspapers such as The Hindu, The Economic Times, PIB, Times of India, India Today, Indian Express, Business Standard, all Government official websites. Our complete current affairs helps you to get more marks in Banking, insurance, UPSC, SSC, CLAT, Railway and all other competitive Exams. Parliament passes SC and ST (Prevention of Atrocities) Amendment Bill, 2018
On 9th August 2018, Parliament passed the Scheduled Castes and Scheduled Tribes (Prevention of Atrocities) Amendment Bill, 2018.
SC and ST (Prevention of Atrocities) Amendment Bill, 2018:
i. On 9th August 2018, the bill was passed by Rajya Sabha through voice vote. It was passed in Lok Sabha on 6th August 2018.
ii. Section 18A has been inserted to eliminate the need for a preliminary enquiry before registration of an FIR, or obtain approval of any authority before arrest of an accused, and to restore the provisions of Section 18 of the Act.
iii. The amended bill has removed the provision to obtain prior permission for the arrest of those committing atrocities against Dalits.
iv. Under the legislation, there is a provision to set up special courts to handle cases related to atrocities against SCs and STs.
v. The Bill has removed provision for anticipatory bail for a person accused of atrocities against SC/STs.
vi. It states that, no preliminary inquiry will be needed to register a criminal case and an arrest under this law will not be subject to any approval. 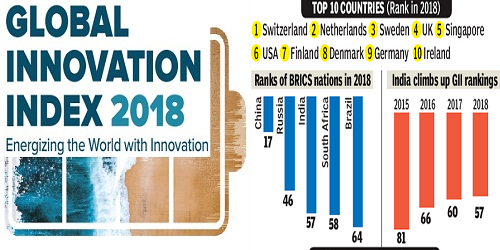 GII- 2018:
i. The event was organized by the Confederation of Indian Industry (CII) along with the World Intellectual Property Organization (WIPO), in collaboration with Department of Industrial Policy and Promotion (DIPP). CII is one of the founding partners of GII.
ii. Global Innovation Index 2018 is the 11th edition of GII. The theme for GII 2018 is: “Energizing the World with Innovation”.
iii.The GII 2018 analyses the energy innovation landscape of the next decade and identify possible new technological breakthroughs and innovative approaches and their sources at the country, region, or firm level.
iv. It also analyses innovations in energy production, energy storage, energy transport and distribution, and energy consumption.
v. India’s rank on the Global Innovation Index (GII) is 57 in 2018. It has improved from 60 in 2017. India has been consistently improving in GII ranking in the last 2 years.
vi. Top countries in GII are as follows:

Objective:
To promote traditional industries and spur local trade.
Key Points:
i.This initiative will enhance skills of local people, result in economic progress of artisans of Uttar Pradesh.
In the Summit the following took place:
i. Distribution of loan sanction papers with a tagline: ‘Nayi Udaan, Nayi Pehchan’ worth Rs 1006 crore to 4085 artisans of 75 districts of ODOP scheme digitally.
ii. 2 MoUs were also signed with US-based companies. They were:

iii. Under this, Amazon will train the artisans and small entrepreneurs of districts, including Lucknow, Gorakhpur, Allahabad, Ferozabad, Moradabad, Agra, Kanpur, Meerut, Bhadohi and Varanasi.
iv. A 3-day exhibition was inaugurated in which one product of each district would be on display.
v. ODOP toll free number and website were launched by the President.
vi. Technical sessions on handloom, textiles craft, tourism, agro and food processing, credit and finance was held.
Background:
♦ Uttar Pradesh contributes around 44 per cent in the total handicraft exports of the country.
♦ Under the ‘One District One Product’ scheme, the state government has set a goal of providing employment to 25 lakh people in five years through the financial assistance of Rs. 25,000 crores.

About Swachh Survekshan 2019:
i. Swachh Survekshan 2019 has been planned to be conducted from 4th – 31st January 2019 – to rank all cities under Swachh Bharat Mission-Urban (SBM-U).
ii. This will be the fourth survey of MoHUA.
About SBM ODF Plus and ODF Plus Plus Protocol:
i. The SBM ODF Plus and SBM ODF Plus Plus protocols aims at addressing the issue of holistic sanitation.
ii. SBM ODF Plus protocol focuses on sustaining community/ pubic toilet usageon parameters of functionality, cleanliness and maintenance.
iii. SBM ODF Plus Plus will focus on achieving sanitation sustainability by including safe containment, processing and disposal of fecal sludge and septage.
iv. A total of 3,223 cities of 18 states have become Open Defecation Free and they will be judged on these parameters.
About Swachh Manch web portal:
i. It is a web-based common platform which aims to bring together every stakeholder contributing to the Swachh Bharat Mission.
ii. It will enable uploads of pictorial evidence of citizens and organizations participating in the initiatives.
iii. The Swachh Manch will also be integrated with the Swachhata App as a citizens’ grievance redressal platform.
About Ease of Living Index:
i. The Ease of Living Index is an initiative of the Ministry of Housing and Urban Affairs (MoHUA) and will be launched with an Ease of Living Index dashboard.
ii. It would contain overall national ranking of 111 cities across pillars, category, geographical zone and population classifications.
iii. The cities are ranked based on 4 parameters namely : Institutional, Social, Economic and Physical which are further broken down into 15 categories and 78 indicators.
iv. The dashboard will also have a comparison feature.
v. The Ease of Living assessment standards are closely linked to the Sustainable Development Goals (SDGs)

Parijat Urja Chakra launches campaign to educate farmers about ill effects of crop residue burning
On August 10, 2018, Parijat Urja Chakra in collaboration with Krishi Vigyan Kendras (KVKs) organized a special campaign at Fatehgarh villageof Ambala in Haryana.
Objective:
It aims to create awareness about the ill effects of crop residue burning and management
Key Points:
About the campaign:
i. The campaign focused on sensitizing the participants about the importance of straw management  and recommended machinery and techniques of straw management.
ii. Safety handbooks were also distributed amongst the farmers on safe use of crop protection products.
iii. The burning of agricultural Crop Residue (CRB) has

Other announcements:
Haryana government is also set to launch a massive campaign in the state to create awareness of proper management of crops residue.
About Parijat industries (India Pvt Ltd ).
♦ It is one of the leading agro-chemical manufacturing company with its manufacturing base at Ambala, Haryana.
♦ It is present in 16 Indian states, and exports to over 70 countries.
♦ It sells branded formulations in countries of Asia, Africa, CIS, Europe, North and South America. 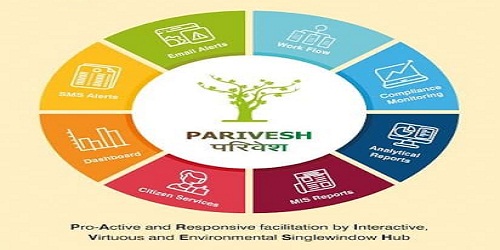 PARIVESH:
i. PARIVESH is a Single-Window Integrated Environmental Management System, developed in line with ‘Digital India’ initiative. It also follows the Minimum Government and Maximum Governance ideology.
ii. PARIVESH automates the complete process of submitting the application and tracking the status of proposals at every stage of processing.
iii. It will deal with proposals submitted by Project Proponents to the Ministry of Environment, Forest and Climate Change (MOEFCC), State Level Environmental Impact Assessment Authorities (SEIAA), to obtain clearances from Central, State and district-level authorities.
iv. It is a workflow based application. It is based on the concept of web architecture.
v. It has been designed, developed and hosted by the Ministry of Environment, Forest and Climate Change, with technical support of National Informatics Centre (NIC).
vi. Highlights of PARIVESH: 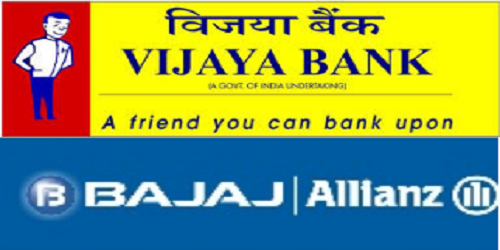 i. This is being run as a pilot project in 8 branches of rural Punjab, Haryana, Gujarat and Andhra Pradesh.
ii. The bank will be launching the same process for loan processing, insurance, eKYC  account opening and others sections mostly extending to the semi-urban and urban regions as well.
How it works:
i. A Customer needs to select the desired service (funds transfer, cash withdrawal) and feed-in their Aadhaar numbers in the micro ATM.
ii. Next they will choose ‘IRIS’ as the desired mode of authentication.
iii. Verification will be done in 3-5 seconds.
iv. The transaction will be completed after the biometric details are verified from the UIDAI database.
About the technologies used:
i. The micro ATM tablets which are STQC certified and UIDAI compliant registered devices do not require debit cards, passwords, PINs, and user IDs.
ii. The Iris scan technology is completely contactless and provides up to 98.2 per cent authentication success rate.
Axis Bank:
Headquarters: Mumbai.

COTIF Cup(under-20):Argentina Won the Tournament by defeating Russia
On August 8,Argentina’s U-20 football team won Torneo Internacional de Fútbol Sub-20 de L’Alcúdia (L’Alcúdia International Under-20 Football Tournament),also known as COTIF Tournament,held at Valencia, Spain by defeating Russian team in the Extra Time by 2-1 goals.
Indian Team Performance:
i. India was playing for the first time in the tournament.Floyd Pinto was the coach of the Under 20 team appointed by AIFF(All India Football Federation).
ii. Indian team won over Argentina in the final group stage match,which held on August 5th, 2018 by 2-1 & Created History by defeating the 6 time Champion.
iii. Deepak Tangri’s goal in the fourth-minute at the start of the game was the first goal from India.
iv. Anwar Ali scored the second goal in free kick which lead India to win the match.
About COTIF:
The first COTIF Cup was held in 1984 in Valencia, Spain. 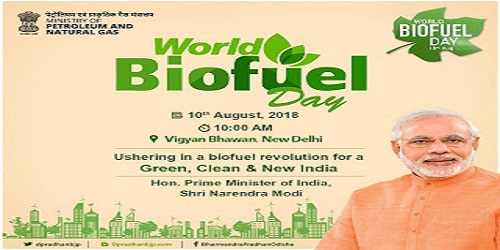 Objective:
The Objective of the World Biofuel Day is to raise awareness about the significance of non fossil fuels which can be used as an alternative to fossil fuels.
KeyPoints:
i. The World Biofuel Day is being observed by the Ministry of Petroleum & Natural Gas for the last three years.
ii. Prime Minister Narendra Modi was the Chief Guest for the inaugural session of the World Biofuel Day programme.
iii. On the occasion, Prime Minister launched web portal PARIVESH, a single window for environmental, wildlife, forest and Coastal Regulation Zone clearances.
iv. The Prime Minister also released a booklet on“National Policy on Biofuels 2018”.
v. For the Significant use of Biofuel,the Government has also approved the National Policy on Biofuels-2018 in June 2018. The policy has the objective of reaching 20 per cent ethanol blending and 5 per cent biodiesel blending by 2030.
Future Enhancements:
Prime Minister Narendra Modi said that 12 modern biofuel refineries worth ten thousand crore rupees will be established across the country & this will provide employment to 1.5 lakh youth.
Target:
The Prime Minister said, the government is targeting ten per cent ethanol blending in petrol by 2022 and 20 per cent by 2030.