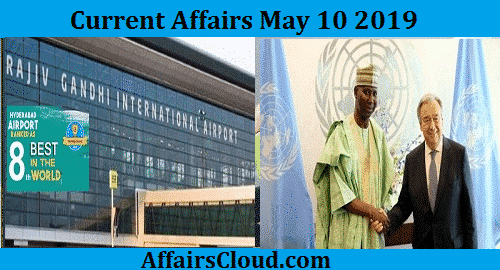 Hyderabad’s Rajiv Gandhi International Airport ranked among top 10 in the World-Survey by Air Help
In a survey conducted by Air Help, Rajiv Gandhi International Airport of Hyderabad has been ranked as the world’s 8th Best Airport. The airports were rated on the basis of time performance, service quality and food & shopping options. AirHelp is an organization which is specialized in air traveler rights and seeks compensation in cases of delays or cancellations of flights. 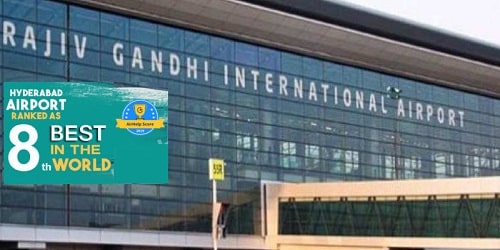 Key Points:
i. According to the ranking, Qatar Airways topped the list for the second consecutive year. It is followed by American Airlines, Aeromexico, SAS Scandinavian Airlines and Qantas.
ii. The worst performing airlines were Ryanair, Korean Air, Kuwait Airways, the United Kingdom’s (UK) EasyJet and Thomas Cook Airlines.
iii. According to the annual rating from AirHelp, The New Jersey Hub was ranked as the worst airport in U.S for the year 2019. The highest-rated Hartsfield-Jackson Atlanta International Airport was ranked 34th  and Newark was at the lowest U.S. spot, at 116.
10 Best Airports of 2019:

Key Highlights
i. During the exercise, naval ships have taken participation in various activities which include formation maneuvering, under replenishment runs, cross-deck flying and exchange of Sea Riders.
ii. While returning Indian naval ships visited Cam Ranh Bay in Vietnam, Qingdao in China and Busan in South Korea which was a part of the annual Eastern Fleet Overseas Deployment.
iii. Both INS Kolkata and INS Shakti had participated in the International Fleet Review (IFR) as a part of 70th Anniversary Celebration of People’s Liberation Army at Qingdao in China and after that they have also participated in the Opening Ceremony of Maritime Security (MS) Field Training Exercise (FTX) at Busan in South Korea. Moreover, these two naval ships have also participated in the International Maritime Defence Expo (IMDEX) 2019 in Singapore.

The 15th Finance Commission Held A 2-Day Meeting With RBI And Banks & Financial Institutions And Renowned Economists
The 15th Finance Commission of India (FCXV) chaired by Shri N.K. Singh, had a 2-day visit to the financial capital of India, Mumbai (at the headquarters of the RBI), on 8th and 9th May 2019 to conduct meetings with the Reserve Bank of India (which is headed by its Governor Shri Shaktikanta Das), the Banks and the Financial Institutions.  The Commission was comprised of all the Commission Members and senior officials…………………………………..Click here to Read more

TCS becomes India’s most valued firm again; surpasses RIL in market-cap
On May 9th, Indian IT firm, Tata Consultancy Services(TCS) surpassed the Reliance Industries Limited (RIL), led by Mukesh Ambani, in terms of Market capitalisation and became the India’s most valued firm by market capitalisation. As per BSE data, the market-cap of TCS stood at Rs. 8.13 trillion whereas the market-cap of RIL was Rs.7.95 trillion.

India gets its first ever ice cafe in Gaya Village at 14,000 feet
Border Road Organisation (BRO) officials have created India’s first ever ice cafe in the mountain village of Gaya in Ladakh region of Jammu and Kashmir, at 14,000 feet height above sea level, on the famous ManaliLeh Highway. The ice sculpture, resembles a Buddhist meditation place, was created by natural process. 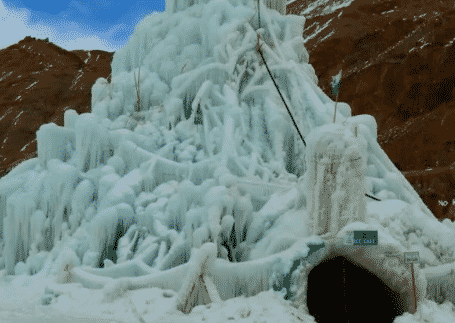 Key Points:
i. The artificial glacier has been built by running pipes under frost lines then pushing water through these pipes into the freezing air, which causes it to fall as ice on the ground, and is one of the popular methods to conserve winter wastewater on the hills during winter.
ii. The design of the ice cafe has been inspired by the works of famous Indian engineer and innovator and education reformist, SonamWangchuk.
About Jammu and Kashmir:
♦ Governor: Satya Pal Malik
♦ Districts : 22
♦ Official languages : Urdu

DGFT has prohibited the imports of non-BIS compliant second-hand electronics and IT goods
The Directorate General of Foreign Trade (DGFT) of the Indian government has banned the imports of second-hand or refurbished electronics and IT (Information Technology) goods without registration and compliance with the BIS (Bureau of Indian Standards) labeling requirements, under the Electronics and IT Goods (Requirement of Compulsory Registration) order 2012.
Key points:
i. The imports of the goods are allowed only through the registration with the BIS or on particular letter-of-exemption from the Ministry of IT and Electronics (MeitY) for a specific consignment.
ii. If they fail to comply with the BIS standards, the imported goods will be re-exported by the importer. In case they aren’t re-exported, the customs authorities will deform the products and dispose of them off as garbage.
iii. India’s imports of electronics have risen from 51.5 $ billion in 2017-18 to 55.6 $ billion in 2018-19. 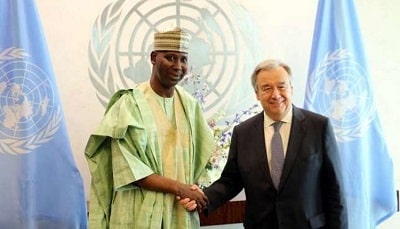 Key Points:
i. Prof. Tijjani Bande was born at Zagga (Present-Kebbi State) and he was the permanent representative of Nigeria to the UN.
ii. He is a graduate in Political Science from Ahmadu Bello University, Nigeria and holds MA (Political Science) from Boston University, USA  as well as Ph.D (Political Science) from the University of Toronto, Canada.
iii. He served the Le Centre Africain de Formation et de Recherche Administratives pour le Dèveloppement (CAFRAD) as the Director-General from January 2000 to February 2004.
iv. Between 2004 and 2009, he was the Vice-Chancellor Usman Danfodiyo University, Sokoto. He has also served as the Director-General of the National Institute for Policy and Strategic Studies in Nigeria from 2010 to 2016.
v. He is the recipient of Nigeria’s Officer of the Order of the Federal Republic (OFR), one of Nigeria’s highest national honours. Along with this, he has also won merit awards from various institutions and Governments, including US and China.
About UNGA:
♦ Formation: 1945
♦ Headquarters: New York, US 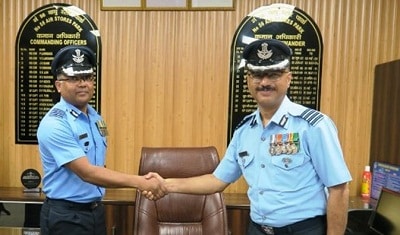 i. He was commissioned in the Logistics branch of IAF in 1990.
ii. He has the experience of holding various appointments in Operational bases and Depots.
iii. The Officer has been commended by the Air Officer Commanding-in-Chief (AOC-in-C) and Chief of the Air Staff (CAS) for his distinguished service.
About Indian Air Force :
♦ Headquarters: New Delhi
♦ Founded: 8 October 1932, India
♦ Role: Aerial warfare

A microprocessor named ‘AJIT’ developed by IIT Bombay
A group of researchers and professor Manav Desai from Indian Institute of Technology (IIT), Bombay have developed a microprocessor named ‘AJIT’ which was indigenously conceptualised, designed, developed and manufactured. The chip of the microprocessor was developed at Semi-Conductor Laboratory in Chandigarh. This was the first time that academia, industry and government worked together for the development of new technology.
Key Highlights
i. The project was funded by IIT Bombay, Ministry of Electronics and Information Technology (MeitY) and Mumbai based Powai Labs. The team developed a toolset called AHIR-V2, which can convert an algorithm to hardware to design the microprocessor circuit.
ii. It is a medium sized processor which can be used for different purposes like inside a set-top box, as the control panel for automation systems, in a traffic light controller or even in robotics systems.
iii. The microprocessor ‘AJIT’ will cost around Rs 100 if manufacture about 10 lakh unit at a time.

Samsung launched world’s Highest Resolution Image Sensor
Recently, South Korea based Samsung company has launched the world’s first highest resolution image sensor of 64 megapixels. This image sensor will be used in upcoming smartphones of Samsung and the objective is to meet the growing demand for smartphones with better image quality. 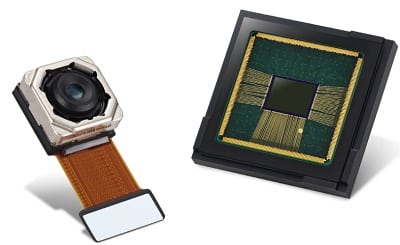 ii. According to Samsung, the market size of image sensor is expected to grow because of latest advancements in the field of artificial intelligence and 5G technologies and there is also a scope of developing different types of sensors due to growing demands for self-driving cars.

First brown bear sighting in Portugal in over a century
On 9th May 2019, Wildlife Experts from Institute for Conservation of Nature and Forests (ICNF) have confirmed that the reappearance of brown bear in Portugal after one bear was spotted in the Montesinho Natural Park and Braganca commune in northeastern Portugal in more than a century. 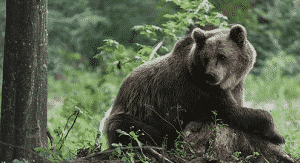 Key Points:
i. It is usually known to live in the western Cantabrian Mountains in northern Spain.
ii. Brown bears have been extinct in Portugal since the 19th century, and the last reports are between the 18th and the end of the 19th century.
iii. In 2018, According to the environmentalist foundation Oso Pardo, 330 bears were counted in the Cantabrian mountain range in Spain.

Bengal Tigers May Not Survive Impact of Climate Change : UN Report
A team of researchers from Bangladesh and Australia have claimed that the majestic Royal Bengal Tiger, which dominates the marshy mangrove ecosystem in the Sunderbans forest reserves, is under threat due to climate change and the unprecedented rise in sea levels.It was published in the journal named Science of the Total Environment.
Key Report Highlights :
i. According to the researchers, there may be no tiger habitats left in the Bangladesh Sundarbans by 2070.
ii. In 2010, World Wildlife Fund for Nature had reported that even a 11-inch rise in water levels can wipe out the tiger population in the region by 96%.
iii. Extreme weather events, heat waves and changing weather patterns could have an even greater impact on the decline than the rise in sea level.
iv. Since the beginning of the 20th century,  the tiger population has been in constant decay due to uncontrolled hunting, habitat loss and illegal trade of animal parts.
About Sundarbans Reserved Forest:
♦ Location:    Khulna Division, Bangladesh
♦ Bangladeshi portion of Sundarbans(Ramsar Wetland ) :
Official name – Sundarbans Reserved Forest
Designated – 21 May 1992
♦ Indian portion of  Sundarbans(Ramsar Wetland ) :
Official name- Sundarban Wetland
Designated- 30 January 2019 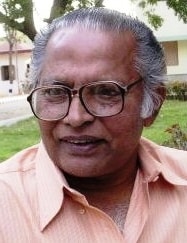