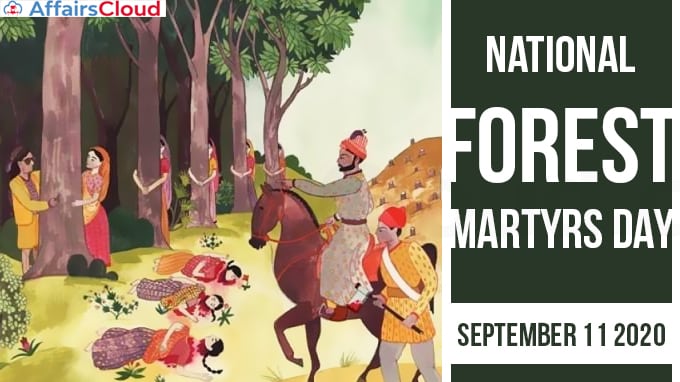 National Forest Martyrs Day is observed annually on September 11 in India to pay tribute to those who have sacrificed their lives in order to protect the environment, forests and wildlife across the country. September 11 was chosen to commemorate the Khejarli massacre, which took place on September 11 in 1730.

In 2013, the Ministry of Environment and Forest, Government of India made a declaration to observe the day.

i.For the 1st time, the Minister of Environment, Forest and Climate Change(MoEFCC) observance of the day was made at the national level.

ii.Prakash Javadekar, Union Minister of Environment, Forest and Climate Change, paid tribute to all forest martyrs who died, while protecting invaluable fauna, flora and our natural resources from forest fires, smugglers and due to wildlife attacks by single horned rhino, tigers and elephants.

iii.Digital Certificates were issued to the forest staffs, to recognise the forest personnel who laid their lives while performing their duty in the year 2019-20.

On September 11, 1730 more than 360 people of the Bishnoi tribe led by Amrita Devi Bishnoi, opposed deforestation and were killed in Khejarli, Rajasthan on the orders of Maharaja Abhai Singh Rathore- the Raja of Marwar (Jodhpur) Kingdom due to their  protest to save the trees.

Later, the massacre was known as a precursor to the 20th century Chipko movement.

ii.A Forester Memorial has also been instituted in the same campus to commemorate the foresters who laid  down their lives to protect the Forests and Biodiversity of the country.

ii.A consent for the 2nd phase was also indicated by JICA. To further reinforce, the ministry is working on a SOP(standard operating procedure) to support frontline staff and their family members.