On April 18, 2020, Prahlad Singh Patel, the Union Minister for Culture, Independent Charge, launched the National List of Intangible Cultural Heritage (ICH) of India in New Delhi with the aim to create awareness about the various intangible cultural heritage sites from different states of India at national and international level and ensure their protection. 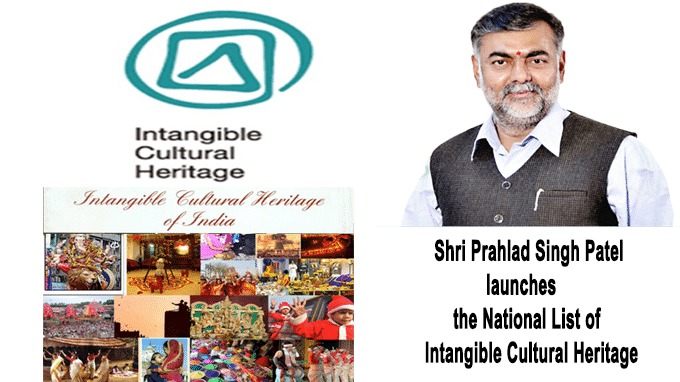 i.This list is a part of the vision 2024 of the Culture Ministry & has been built in collaboration with Sangeet Natak Akademi (SNA) and Indira Gandhi National Centre for the Arts (IGNCA).

ii.The present intangible cultural heritage traditions in the list have been collected from the projects approved under the scheme for ‘Safeguarding the Intangible Cultural Heritage and Diverse Cultural Traditions of India’ created in 2013 by the Ministry of Culture.

iii.This list has been classified into 5 categories based on the UNESCO’s (United Nations Educational, Scientific and Cultural Organization) mandate in which intangible cultural heritage is demonstrated: It includes,

iv.The list has over 100 elements already and it also includes the 13 elements of India that have already been inscribed on the UNESCO Representative List of the Intangible Cultural Heritage of Humanity.

The full list can be found in the link below,
https://www.indiaculture.nic.in/national-list-intangible-cultural-heritage-ich

About Intangible heritage:
In 2003, the General Assembly of UNESCO adopted the Convention on the Protection of Intangible Heritage as an international treaty and recognized that cultural heritage includes not just tangible places, monuments and objects, but also traditions and vibrant expressions.