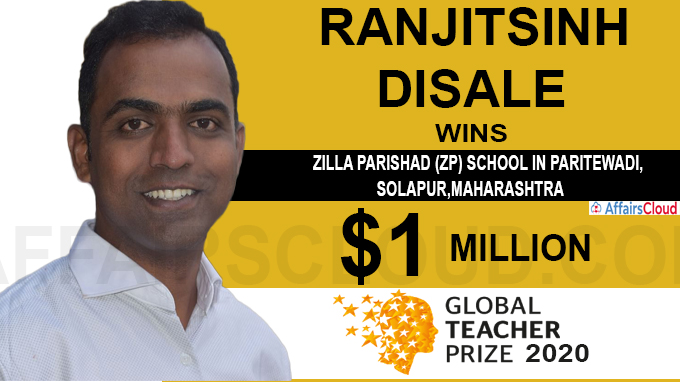 The Prize was founded by Varkey Foundation and organised in partnership with UNESCO(United Nations Educational, Scientific and Cultural Organisation).

Reason for his Award

He won this award as he transformed the life of young girls at the Zilla Parishad Primary School and has ignited the Quick-Response (QR) coded textbook revolution in India.

i.Ranjitsinh Disale announced that he will share half the prize money with his fellow Top 10 finalists, where each will receive over US$55,000.

ii.This is the 1st time that the winner of the  Global Teacher Prize has shared the prize money with other finalists.

In the ceremony,  US$45,000 COVID Hero Award, supported by CVC Capital Partner was given to UK(United Kingdom)Maths teacher Jamie Frost, whose free DrFrostMaths helped students during the COVID-19 pandemic.

ii.This prize will create a platform to highlight the efforts of extraordinary students around the world that makes a real impact on learning, on the lives of their peers and beyond society.

On 1st October 2020, the Right Livelihood Award Foundation announced the four winners of the 2020 Right Livelihood Award which is also known as the “Alternative Nobel Prize”. The four activists Ales Bialiatski of Belarus, Nasrin Sotoudeh of Iran, Bryan Stevenson of the United States(US) and Lottie Cunningham Wren of Nicaragua shared the 2020 award for their contribution towards equality, democracy, justice and freedom.