On July 4, 2019, The Union Minister for Finance and Corporate Affairs, Smt. Nirmala Sitharaman presented the Economic Survey 2018-19. It was prepared by the Chief Economic Advisor Krishnamurthy Subramanian. The Survey forecasts a growth rate of 7 per cent for FY20, as compared to the growth rate of 6.8 per cent in FY19.It had a cover page in skyblue colour as it adopts an unfettered approach in thinking about the appropriate economic model for India. 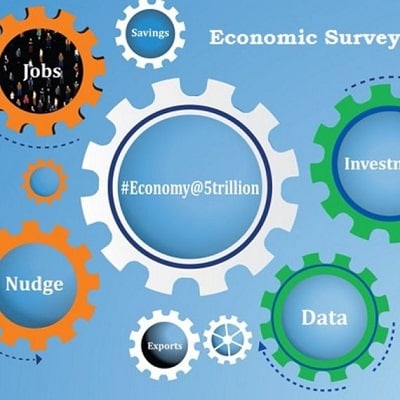 Highlights of the Economic Survey 2018-19
Private Investment as the Key Driver of Growth, Jobs, Exports and Demand

Ending Matsyanyaya to Ramp up Capacity in the Lower Judiciary

Analysis of the Swachh Bharat Mission(SBM) State of the Economy

Smart City Mission
The Survey showed that projects worth over Rs 2.05 lakh crore are proposed in 100 cities under the Smart Cities Mission and significant progress has been made in terms of implementation of these projects.

About Economic Survey:
Economic Survey is an annual document prepared by the government reviewing the economic developments over the past year.