On February 19, 2020 Kiran Mazumdar-Shaw, Chairperson and Managing Director (MD) of Bengaluru based biopharmaceutical company Biocon, won Ernst & Young Entrepreneur of the year 2019 (for his innovation & affordable life saving medicines), at the 21st edition of the awards held in New Delhi, India. 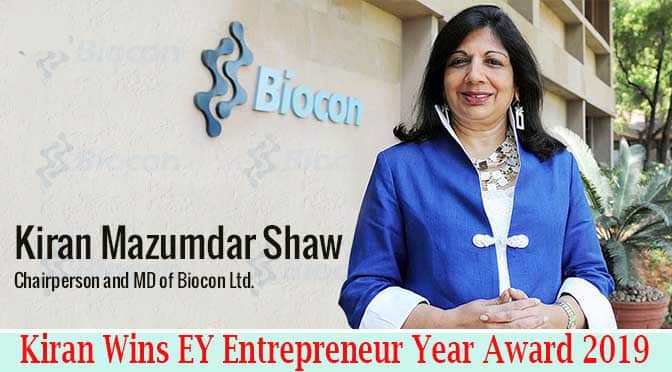 Piyush Goyal, Union Minister for Railways and Commerce & Industry and Anurag Thakur, Minister of State (MoS) for finance and Corporate affairs, were the chief guest and guest of honour respectively.

i.Awards were announced in 9 categories, with the winners coming from both mature industries and unicorns.

ii.About Mazumdar-Shaw: She will also represent India at the EY World Entrepreneur of the Year Award (WEOY) in Monte Carlo between June 4 and 6, 2020. She was also one of the Indian signatories of the Giving Pledge, who dedicated the majority of her wealth to philanthropic causes.

v.Tuhin Parikh, senior managing director (Real Estate), BlackStone India, was the first recipient awarded with “Transformational Impact Person of the Year award” & this category has been newly launched to recognise individuals who have transformed both the industry and ecosystem in India.