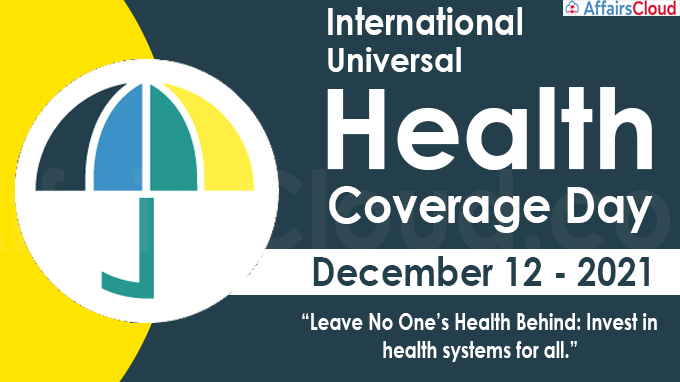 The day also signifies the unprecedented momentum and global commitment to achieving Health for All by 2030.

The theme of UHC Day 2021 is “Leave No One’s Health Behind: Invest in health systems for all.”

The UHC Day, 12th December, also marks the anniversary of the UN’s unanimous endorsement of universal health coverage in 2012

i.UHC entails ensuring that all individuals and communities have access to quality health services, including prevention, promotion, treatment, rehabilitation, and palliation, without incurring financial hardship.

i.Ayushman Bharat is a flagship scheme of the Indian government.

ii.The scheme was recommended by the National Health Policy 2017 to achieve the vision of Universal Health Coverage (UHC).

iii.It was designed to meet Sustainable Development Goals (SDGs) and its underlying commitment to “leave no one behind.”

In 2018, The government announced the creation of around 1.5 lakh HWCs by transforming the existing Sub Centres and Primary Health Centres.