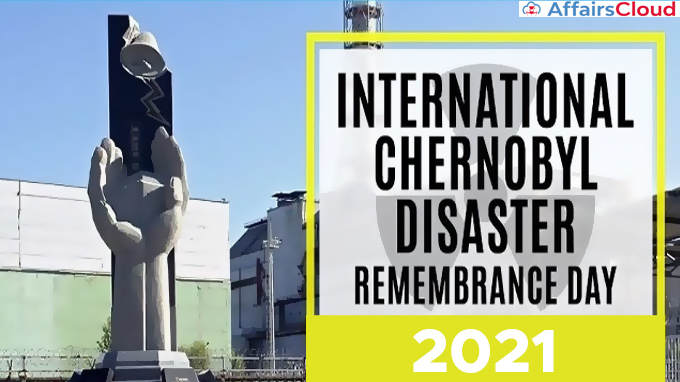 The United Nations(UN)’s International Chernobyl Disaster Remembrance Day is annually observed across the globe on 26th April to mark the anniversary of the 1986 Chernobyl nuclear power plant disaster.

The day aims to create awareness about the consequences of the Chernobyl disaster and the risks of nuclear energy.

i.Chernobyl disaster or the Chernobyl nuclear power plant disaster occurred on 26th April 1986 at the No. 4 reactor in the Chernobyl Nuclear Power Plant, Pripyat, northern Ukraine.

ii.The explosion released a large amount of high-level radioactive materials into the atmosphere.

iii.More than 8.4 million people across Ukraine, Belarus, and Russia were exposed to radiation.

iv.This is one of the worst nuclear disasters in history in terms of cost and casualties.

v.The long term effect of the accident includes the increase of thyroid cancer among children in Ukraine, Belarus, and Russia.