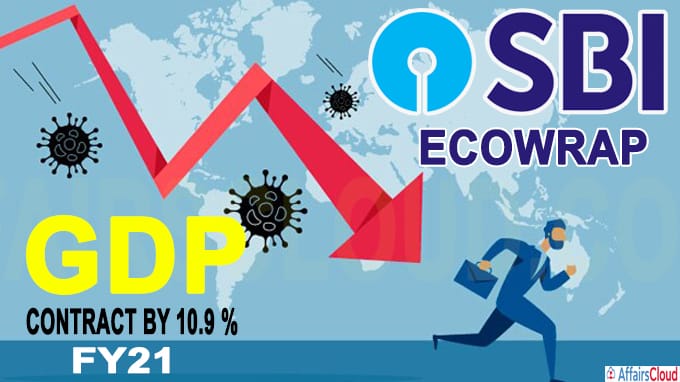 The State Bank of India’s (SBI) Ecowrap report estimated that the real Gross domestic Product(GDP) for FY21 is expected to shrink by around 10.9%(-10.9%), a decline of full year growth, against its earlier estimate of 6.8%. The report comes after India’s economy contracted by a record 23.9% in 1st (April-June) quarter of FY21. The report added that all the quarters of FY21 will exhibit negative real GDP growth.

i.The contraction in the 1st Quarter was due the nationwide lockdown imposed on March 25, 2020, in the wake of the COVID-19 pandemic.

ii.It is India’s worst growth performance since India started to report quarterly GDP data in 1996. It is  far worse than the market and its estimates.

i.As expected the Private Final Consumption Expenditure (PFCE) growth collapsed as the measures of COVID-19 has reduced the consumption of mostly essential items.

ii.The share of the private consumption expenditure will remain on the higher side in overall GDP estimate, as investment demand will not be recovered due to unused capacity

iii.If it remains at 57% of GDP in nominal terms, there will be about a 14% decline in PFCE growth in FY 21, against an average of 12% growth for the nine-year period ended FY20.

iv.This represents an average fluctuation of 26% in the current fiscal indicating a consumption washout

i.In a meeting with the 15th Finance Commission the Union Health Minister Harsh Vardhan highlighted that the government aims to gradually increase the public health expenditure to 2.5% of Gross Domestic Product(GDP) by 2025.

ii.According to The report titled, ’Implications of AI on the Indian Economy’ by National Association of Software and Services Companies (NASSCOM) along with the Indian Council for Research on International Economic Relations (ICRIER) and Google, a unit increase(measured as the ratio of AI to total sales) in Artificial Intelligence(AI) intensity can result in a 2.5% increase in India’s Gross Domestic Product(GDP) in the immediate term.

About SBI:
Headquarters– Mumbai, Maharashtra
Chairman– Rajnish Kumar
Tagline– The banker to every Indian; With you all the way; Purely banking nothing else; The nation banks on us.