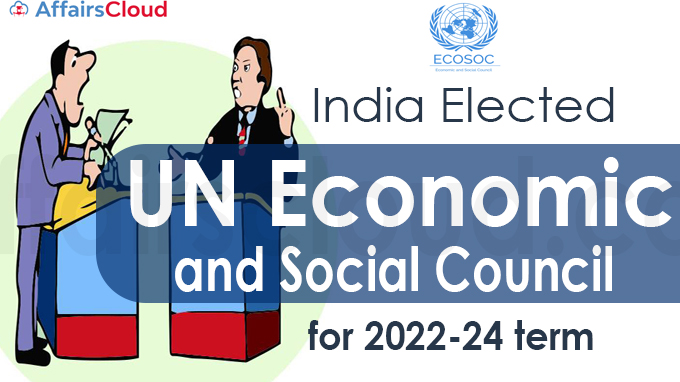 India along with 17 other countries has been elected to the United Nations Economic and Social Council (ECOSOC) for the 2022-24 term beginning on January 1, 2022.  India was elected in the Asia-Pacific States Category along with Afghanistan, Kazakhstan and Oman.

Other Countries to get elected

iii.From the Latin American and Carribean states, Belize, Chile and Peru were elected.

iv.Meanwhile in the Economic and Social Council by-election –

Note –  India is currently serving the 2021-22 term as a non-permanent member  of the powerful UN Security Council and is set to assume the Presidency of the UNSC in August, 2021.

It is one of the 6 principal organs of the UN and it coordinates economic, social, and related work of the fourteen UN specialized agencies, functional commissions and 5 regional commissions.

April 21, 2021, India was elected by acclamation (a form of election that does not use a ballot) to 3 bodies of the UN Economic and Social Council (ECOSOC). It has been elected to the 3 bodies for a 3-year term beginning January 1, 2022.