The 1st Edition of the World Cotton Day (WCD) was observed on October 7, 2019. It was organized by the World Trade Organization (WTO) as an initiative of the Cotton-4 (C4) countries (Benin, Burkina Faso, Chad and Mali) in collaboration with the United Nations Food and Agriculture Organization (FAO), the United Nations Conference on Trade and Development (UNCTAD), the International Trade Centre (ITC) and the International Cotton Advisory Committee (ICAC). 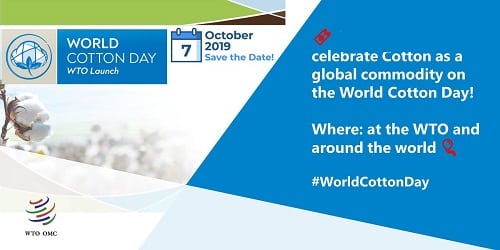 Key Points:
i. The Cotton-4 countries had urged the United Nations General Assembly (UNGA) to officially recognize this day.
ii. The day is aimed to recognize cotton and its stakeholders in production, transformation and trade.
iii. Mahatma Gandhi was chosen as the icon for the WCD 2019.

WCD event
i. The 5 day WCD programme was held in Geneva, Switzerland from October 7-11, 2019.
ii. A high-level plenary session was held which was attended by heads of states, heads of international organisations and executives from the private sector.
iii. Thematic sessions on trade, value addition, sustainability, technology & innovation and market outlook were also held.
iv. The photo contest and a fashion event were also held.
v. World Cotton Day Publication was also launched.

India pavilion
i. It was designed by the National Institute of Fashion Technology (NIFT), a pioneer institute of fashion education in India.
ii. Fabrics which were given Geographical Indication (GI) like Venkatagiri, Chanderi, Maheshwari and Ikkat sarees were displayed along with many other traditional Indian textiles and organic cotton fabrics.

Cotton Exhibition
i. A Cotton Exhibition was held. The Cotton Textiles Export Promotion Council (TEXPROCIL), Handloom Export Promotion Council (HEPC), Cotton Corporation of India (CCI) and the National Institute of Fashion Technology (NIFT) had set up their stalls.
ii. HEPC displayed hand woven products from prominent clusters of India.
iii. A live demonstration of the charkha by a national Awardee weaver Pitta Ramulu was displayed which was later donated to the WTO.

Mahatma Gandhi’s sculpture
A sculpture of Mahatma Gandhi made out of cotton was displayed to commemorate his 150th birth anniversary.