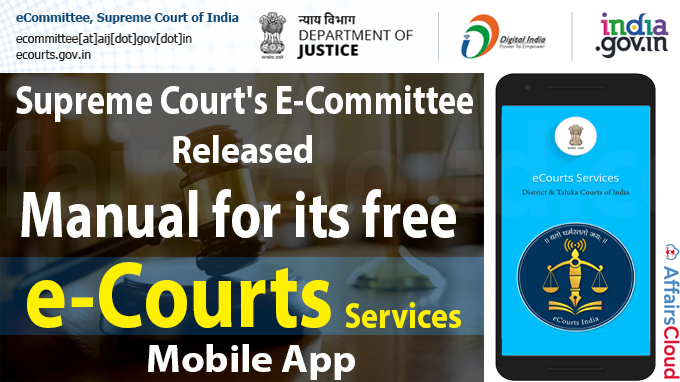 The Supreme Court’s e-Committee released the manual for its free e-Courts Services Mobile App in 14 regional languages. The manual provides explanations about the features of the app, for the easy understanding of the common man. Aim:
The program aims to create a pool of rehabilitation workers at community level who can work alongside ASHA and Anganwadi workers.
About CBID Program on rehabilitation:
i.Initially the programme will be available in English, Hindi and 7 regional languages, namely, Gujarati, Marathi, Odia, Bengali, Telugu, Tamil and Garo.
ii.The classes for the first batch of about 600 students are expected to commence by August,2021.
iii.Mode of training for this course would be both offline/online taking into account the prevailing COVID scenario.
iv.The National Board of Examination in Rehabilitation under the Rehabilitation Council of India will conduct examinations and award certificates to pass-out candidates.

The 51st Edition of virtual Indian Handicrafts and Gift Fair (IHGF) 2021 organized by Export Promotion Council for Handicrafts (EPCH) took place from May 19-23, 2021. It is India’s largest Virtual Fair in the Home, Fashion, Lifestyle, Textiles and Furniture sector. 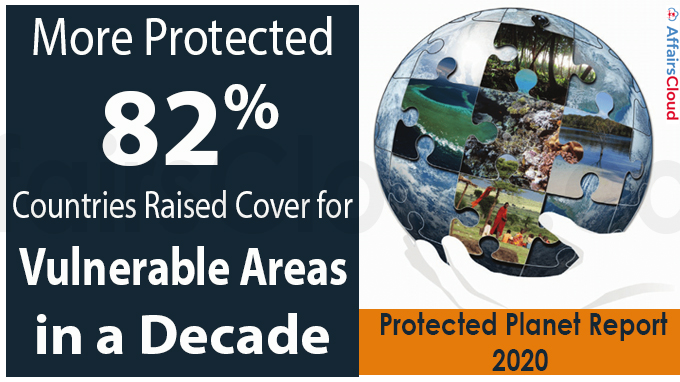 According to the ‘Protected Planet Report 2020’ released by United Nations Environment Programme – World Conservation Monitoring Centre (UNEP-WCMC) and the International Union for the Conservation of Nature (IUCN) & Supported by National Geographic Society, around 21 million square kms (which is 7 times the size of India) have been added within the Protected & Conserved Areas of the world  since 2010. 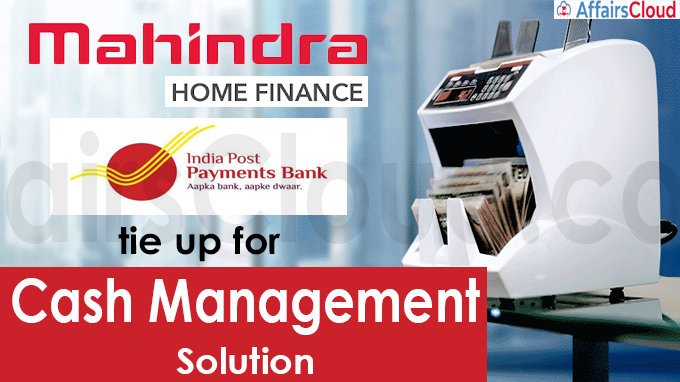 On May 24, 2021, Mahindra Rural Housing Finance Limited(MRHFL), a subsidiary of Mahindra and Mahindra Financial Ltd, and India Post Payments Bank(IPPB) entered into a partnership for cash management solution.
Benefits under the collaboration:
i.Under the partnership, IPPB will be offering cash management and collection services to MRHFL through its access points and postal service providers.
ii.Using the cash management service, MRHFL customers could able to repay their monthly or quarterly loan instalments at over 1.36 lakh post offices.
iii.IPPB’s large national network has facilitated the deployment of cash management solutions to meet the requirements of MRHFL.

Biocon & Its Ex-Official was Fined Rs.14 Lakh for Violating Market Norms by SEBI

Market regulator Securities and Exchange Board of India(SEBI) imposed a total fine of Rs.14 lakh on Biopharmaceutical company Biocon and its former Senior Vice President (R&D) Narendra Chirmule for violation of market norms. The Shergaon Biodiversity Management Committee (BMC) of Arunachal Pradesh has won the best ‘BMC’ award in the India Biodiversity Awards(IBA) 2021. The 5th edition of the IBA was held virtually on May 22, 2021, and the awards were given by the Union Minister of State for Environment, Forest and Climate Change(MoEFCC), Babul Supriyo. The Board of Reserve Bank Innovation Hub (RBIH) has appointed Rajesh Bansal as the chief executive officer (CEO) of the RBIH with effect from May 17, 2021.
About Rajesh Bansal:
i.Rajesh Bansal was a member of the founding team of Aadhaar who played a key role in designing India’s Direct Benefit transfer system, particularly for cooking fuel and electronic KYC(e KYC).
ii.He is an expert in electronic cash transfers and digital financial services and earlier he has also served  in the areas of technology, financial inclusion and payment systems in RBI.
About Reserve Bank Innovation Hub (RBIH):
The board of the RBIH which is headed by Infosys co-founder S (Kris) Gopalakrishnan.
Aim:
Leveraging technology to drive innovation across the financial sector.
Key Points:

Narinder Batra Re-elected as FIH President for a 2nd Term Narinder Batra, Indian Olympic Association president was re-elected as president of the International Hockey Federation(FIH) for a 2nd term at the virtual 47th Congress of the FHI held on May22,2021.

Key points:
i.In the virtual presidential election at the FIH Congress, Narinder Batra secured 63 votes and emerged as the winner in the online voting process, in which 124 member associations participated. His rival Marc Coudron, chief of Belgium Hockey Federation obtained 61 votes.
ii.Till 2024, Narider Batra will be the president of FIH, as the FIH has reduced the term from 4 years to 3 years in 2020 due to the postponement of the Congress.
iii.Batra was the first non-European who had been appointed as the president of the FIH in 2016 at the 45th congress, and also became the first Indian to head the international federation of an Olympic sport.
About International Hockey Federation(FIH):
FIH is the international governing body of field and indoor field hockey.
Establishment – 1924
Headquarters – Lausanne, Switzerland
Chief Executive Officer – Thierry Weil Key Points
i.The kit can detect the spike as well as nucleocapsid (S&N) proteins of the SARS-CoV-2 virus with a high sensitivity of 97% & specificity of 99%.
ii.The regulatory approval for the kit was given by the Drugs Controller General of India (DCGI) and the Ministry of Health and Family Welfare.

Microsoft Announced the retirement of Internet Explorer in 2022

Microsoft has announced that its Internet Explorer 11 desktop application will retire and go out of support on 15th June 2022 for certain versions of Windows 10.
At present, Internet Explorer, which was launched in 1995, holds only a 3.8% share of the desktop browser space which is dominated by Google’s Chrome with 70% share. An international team of researchers has discovered a new species of raver snake from Tuticorin, Tamil Nadu. The new species Platyceps josephi is named after late Herpetologist Naveen Joseph.

About Platyceps josephi:
i.The  Platyceps josephi has distinct white bands on its body and irregular white spots on its head.
ii.The length of the species is less than a metre.
iii.It is a non-venomous terrestrial snake endemic to Tamil Nadu.
Naming Confusion:
i.The team discovered that another snake species named Banded racer had an unstable taxonomic history.
ii.The taxonomic history was conducted based on the studies kept in the Zoological Library of the Natural History Museum, London and the Bodlein Library, Oxford.
iii.The species was first described by English Zoologist George Kearsley Shaw in 1802.
Herpetologist Albert Gunther misidentified the species in 1858.
iv.The team has corrected the scientific names of both the snakes, the banded racer has been named Platyceps plinii and the Wolf snake as Lycodon Fasciolatus. 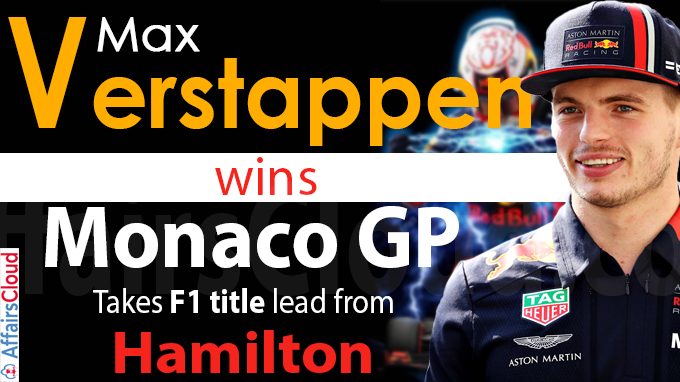 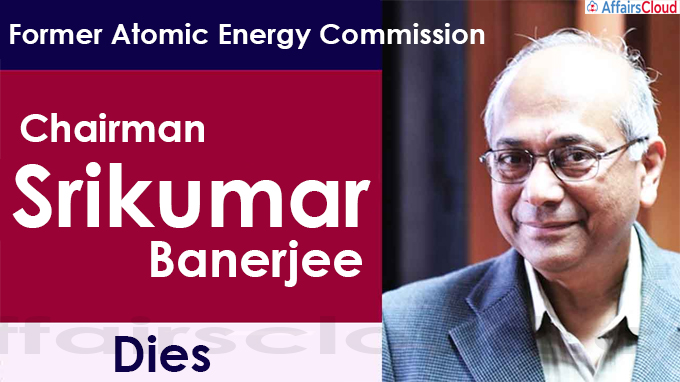 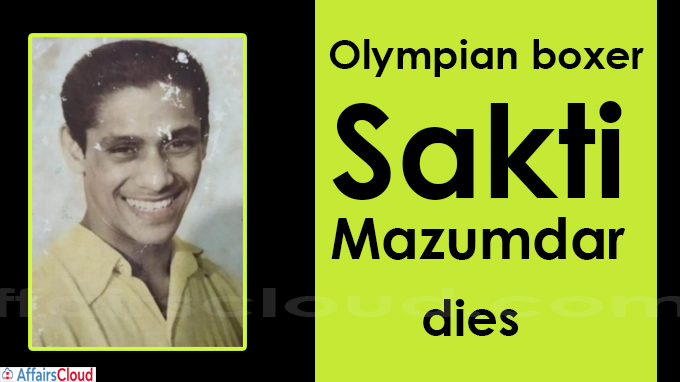 ‘Sach Kahun Toh’- Autobiography of Neena Gupta To Be Released 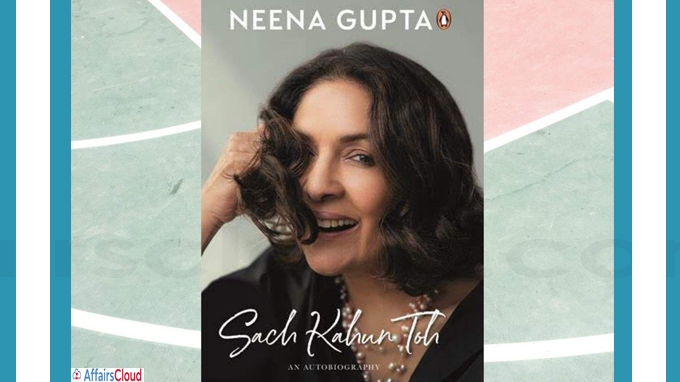 Indian actress and television director, Neena Gupta’s autobiography ‘Sach Kahun Toh’, is set to be published by Penguin Random House India on June 14, 2021.
i.The book was written by Neena Gupta in 2020 during the lockdown, and now it is available for pre-order.
ii.In the book, she shares her life story, details the life’s many choices, big milestones in her life, and her battles against stereotypes, then and now.
iii.About Neena Gupta: She won the National Film Award for Best Supporting Actress in Woh Chokri (1994). 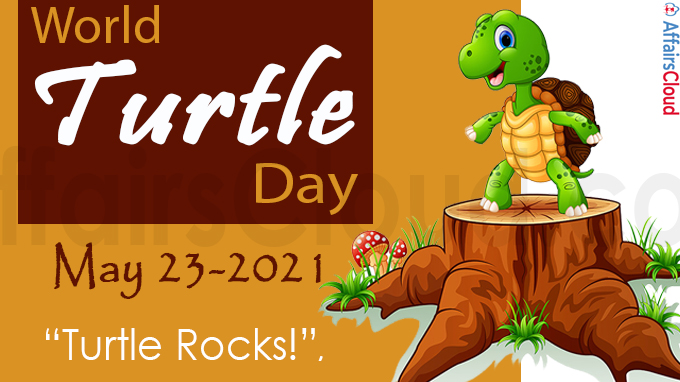 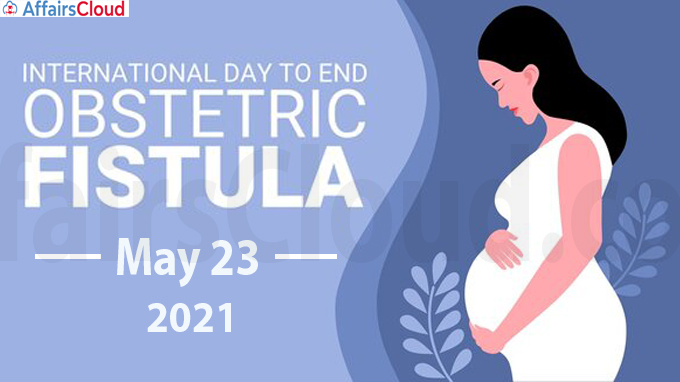 The United Nations (UN)’s International Day to End Obstetric Fistula is annually observed across the globe on 23 May to create awareness and intensify the actions towards ending obstetric fistula. Benefits under the Scheme:
i.The State Government proposed to make arrangements for their maintenance, education and training for employment for those orphaned children up to the age of 21 years.
ii.The state’s orphaned children will be provided with a maintenance allowance of Rs 3000 per month.
iii.Laws were made for the paternal property of those orphans that no one will have the right to sell their paternal property until they are adults. The responsibility regarding this was vested with the District Magistrate of the concerned district.
iv.5 percent horizontal reservation in the state’s government jobs was given under the scheme for the children whose parents have died due to Covid-19.
About Uttarakhand:
Capital – Dehradun
Governor – Baby Rani Maurya 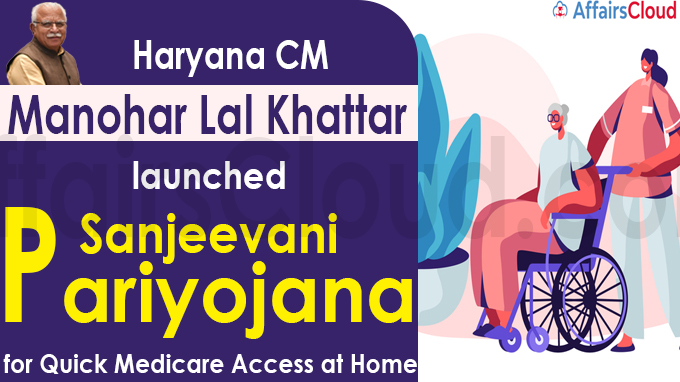 Haryana Chief Minister launched ‘Sanjeevani Pariyojana’ to provide for supervised and quick medical care at home for people in rural areas with mild to moderate symptoms of  COVID-19.

Key Points
As part of the initiative,