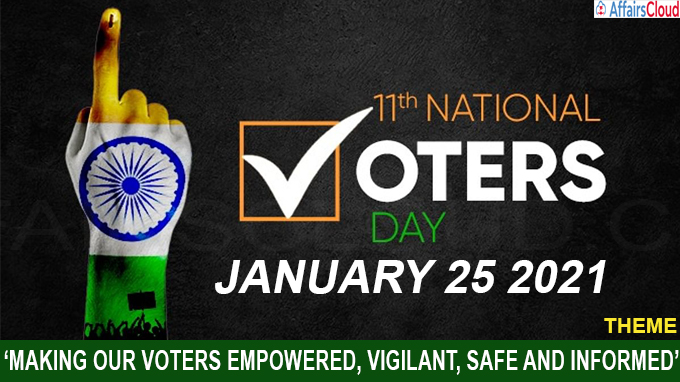 The National Voters Day is annually celebrated across India on 25th January to spread awareness among the voters and to promote informed participation in the electoral process.

The theme of the National Voters Day 2021 is “Making Our Voters Empowered, Vigilant, Safe and Informed”.

To encourage, facilitate and increase the enrolment, mainly focused on new voters.

i.Ram Nath Kovind, the President of India virutlay participated in the celebration events of National Voters Day 2021 in New Delhi from Rashtrapati Bhawan.The events are organised by the ECI.

ii.Ravi Shankar Prasad, Union Minister for Law and Justice, Communications and Electronics and Information Technology participated in the event as the Guest of Honour.

Key Features of the Event:

ii.He also launched “Hello Voters” , the web radio of ECI which can be accessed through the ECI’s website.

iv.He also launched the e-EPIC(Elector Photo Identity Card) programme and distributed e-EPCI and he also felicitated and handed over the EPIC to 5 new voters.

i.The e-EPIC is a non-editable secure portable document format (PDF) version of the EPIC and will have a secured QR code with image and demographics like serial number, part number, etc.

ii.This initiative will be launched in 2 phases,

iii.The e-EPIC will have significance in the upcoming polls in Assam, Kerala, Puducherry, Tamil Nadu and West Bengal.

i.The National Awards for Best practices will be annually awarded to the officers of State and District Level for their contribution in conducting the election in various aspects like IT initiatives, Security Management, Election Management during COVID-19, Accessible Election and contribution in the field of voter awareness and outreach.

ii.The national award will also be presented to the stakeholders like national icons, Civil society organizations (CSOs) and media groups for their contribution in creating awareness among voters.

About Election Commission of India: